June 5, 2010 (ABYEI) — Traditional chiefs from the oil-rich region of Abyei, on Saturday, declared their support to Deng Arop Kuol, the chief Administrator for proving his much-needed hard work as an administrator in supervising the conduct of the referendum scheduled to take place in January 2011. 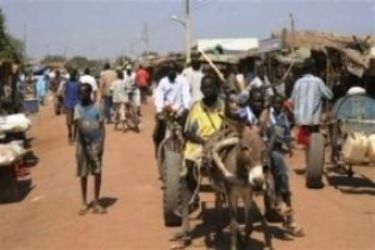 Residents of Abyei are eagerly waiting to partake in the upcoming referendum stipulated in the comprehensive agreement to decide whether they would be part of the north or the south.

Currently, Abyei is accorded a special status under the 2005 peace accords and is managed by a local chief administrator who reports directly to the President of the Republic on issues affecting the area.

In a traditional meeting held at Abyei town on Friday, senior chiefs including Chief Kuol Deng Kuol, commonly known in the area as Kuol Adol, said that the Chief Administrator Deng Arop has done well and he will be their preferred official to oversee the conduct of the referendum in 2011.

The meeting was part of a number of preparatory meetings before the referendum to establish a commission pending the approval of the president to form two institutions.

However, sources close to the president of the government of South Sudan, Salva Kiir Mayardit, said discussions over the formation of the commissions are completed but fell short to give out details about the conclusion meetings.

In the meeting, Kuol Adol said that the chief administrator has initiated a lot of developmental projects and that it is cardinal that he continues.

Miyen Mijak, a local official with the Abyei administration said “I support decisions taken by the local chiefs because the chief administrator has actually proved to be the most hard-working in all previous aspirants of the position.”

“Among the officials who have been observing this local administration post in the past years, Deng has exceptionally and extraordinary proved himself to be a leader aiming at fostering development. There are so many developmental projects that have been initiated by the Chief administrator and they can only be completed if there is continuation,” added Mijak.

“Traditional leaders are therefore persuaded to voluntarily declare their support to the administration of Molana Deng Arop Kuol because he has proved to be hard-working;” he said adding that it is evident that Mr. Deng can do even better given another mandate to govern the region after the referendum.

Dinka Bor going home from Equatoria to an uncertain future

Sudanese ruling party plans to build up ties with SPLM

Arab countries may be hesitant to receive Sudan president: report