(Updated with JEM reactions minimizing the statements of the Sudanese official, paragraphs 7-9)

June 26, 2010 (KHARTOUM) — The Sudanese government said today that the leader of the Justice and Equality Movement (JEM) currently residing in Libya will be asked to leave shortly upon direct orders from Muammar Gaddafi. 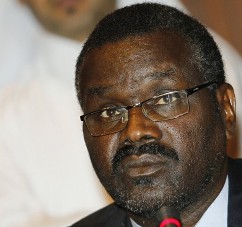 The pro-government Sudanese Media Center (SMC) website quoted the director of the National Intelligence and Security Services (NISS) Mohamed Atta Al-Moula Abbas as saying that Libyan authorities confirmed that they have prohibited Ibrahim from making any media statement “against Sudan” until he leaves the country.

The Sudanese spy chief said that Khartoum is monitoring with the Libyan government the progress of expelling the Darfur rebel leader in line with Gaddafi’s instructions. He did not provide any details on when the decision by Libya was taken.

On Thursday, the Sudanese president Omer Hassan Al-Bashir phoned Gaddafi to protest “hostile moves” by JEM. Sudan state media said that the Libyan leader assured his Sudanese counterpart that his country will not allow any attempt “to undermine the historic relations between the two countries”.

However, Libya has previously ruled out any plans to expel the JEM leader from its territories despite intense pressure from Khartoum to do so.

Sudan is reportedly concerned that Libya is backing demands to move the negotiations from Doha to Tripoli.

The rebel group played down the statements by the head of Sudanese intelligence saying Libya treats its chairman Khalil Ibrahim with much of respect and considerations.

“Libya deals with Dr. Khalil Ibrahim, with respect and dignity as a leader of movement that has an important impact on the overall political situation in Sudan,” said JEM spokesperson Ahmed Hussein Adam.

He further described the statement of Atta Al-Moula as “cheap propaganda” disseminated by the government to divert attention from the successive defeats the Sudanese army suffered during the last weeks in different clashes with the rebel group.

JEM leader Khalil Ibrahim has been stuck in Libya since May after Chadian authorities refused to let him enter the country, destroyed his passports and allowed him to go to Tripoli afterwards.

Chad has been a hub for JEM fighters and political officers through which they entered to their bases inside Darfur. However, a recent thaw in relations between Sudan and its Western neighbor created the unexpected situation for JEM.

Sudan further said it asked the INTERPOL to circulate a warrant for his arrest to answer charges regarding attacking the capital in 2008.

Darfur’s most militarily powerful rebel force, JEM suspended its participation in the peace talks since May 2, saying it wants the reform of the peace process in a way to widen the mandate of the joint mediator and requested guarantees of the neutrality of the host country, Qatar, accused of favoring the Sudanese government.