July 27, 2010 (KHARTOUM) — The head of the African Union-United Nations mission in Darfur (UNAMID) Ibrahim Gambari revealed at a briefing before the UN Security Council (UNSC) today that the peacekeeping force is approaching its full deployment levels. 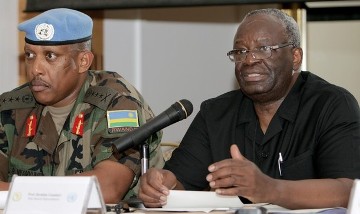 “UNAMID is nearing full deployment, with 88% of military personnel, 70% of Police, including 13 out of 19 Formed Police Units, and 75% of civilian personnel in theatre” Gambari said today.

The UNAMID chief further said that UNAMID has been able to expand its patrols both in number and range throughout the three Darfur States on average more than 100 patrols per day.

Last month a UNAMID document revealed that the month of May was the deadliest one since its deployment in 2008 with 440 people dead in fighting between Darfur rebels and government forces, 126 in tribal violence, and 31 in other violence, including murder.

In May, fighting broke out anew between the Justice and Equality Movement, Darfur’s main rebel group, and the government after the JEM walked out of peace talks in the Qatari capital Doha

Gambari said that the security situation remains dire and that it has not improved since his last briefing particularly because of clashes between JEM and Khartoum.

“Government forces have been able to dislodge JEM from their traditional stronghold in Jebel Moon, West Darfur, the Adula Mountains in South Darfur, as well as disrupt their main supply routes to El Fasher and Nyala. Of late, JEM convoys have been sighted in North Darfur moving northwards, possibly towards the Libyan border. The resumption in fighting was accompanied by JEM withdrawal from the peace talks in Doha” he said.

“In an apparent attempt to take advantage of the Government’s military engagement with JEM, the Abdul Wahid faction of the Sudan Liberation Army attacked Sudanese Armed Forces positions in the Jebel Marra area around 29 May. This led to sporadic fighting between the two parties, civilian casualties and the displacement of several communities”.

The Nigerian diplomat emphasized the sharp rise in attacks against UNAMID and humanitarian personnel.

“UNAMID peacekeepers were attacked on 28 occasions, resulting in 10 dead and 26 injured. We have also seen two instances of kidnapping of UNAMID personnel and 6 cases involving humanitarian colleagues. In the most recent event, on 21 June, armed men in military fatigues attacked UNAMID troops guarding a construction site in Nertiti, West Darfur. In the exchange of fire, three UNAMID military personnel from Rwanda as well as three attackers lost their lives” he said.

Some aid organizations and even UN top officials have questioned the potency of the force saying they are not responding forcefully to attacks.

Last March, the head of U.N. peacekeeping, Alain Le Roy said he wants a full investigation of an ambush of UNAMID near a rebel stronghold in which they were stripped of their equipments.

Sudan’s army has also questioned how UNAMID lost its vehicles, weapons, money and communications equipment in the ambush without a fight.

Le Roy said he wants to know if UNAMID failed to take a stand against the attackers when it should have.

The UN Secretary General Ban Ki-moon’s report on UNAMID highlighted restrictions faced by UNAMID in the course of its work by the Sudanese government and rebels.

“In May alone, UNAMID movement was restricted on 10 occasions, eight by the government of Sudan, reportedly for security reasons,” the report said.

Among the major restrictions is the one imposed by the Sudanese government on the use of tactical helicopters by UNAMID.

“[T]o be fully effective UNAMID too could benefit from more support: support in the form of utility helicopters, a transport company and an aerial surveillance unit; and the lifting of restrictions that prevent the Mission from carrying out its mandate effectively and responding swiftly to emergencies” Gambari told the 15-member Security Council.

Earlier this year, Ethiopia provided five tactical helicopters, after a prolonged struggle by the force to find a country willing to give them.

UNAMID says that the helicopters aim at enhancing the Mission’s ability to protect the civilian population and will also enable a swift and effective response to any developing emergency on the ground.

The U.S. ambassador to the UN Susan Rice said in her remarks that her government Khartoum’s “continued restrictions on UNAMID movements, (on) its ability to fly helicopters in defence of its mission including protection of civilians and evacuation of UNAMID peacekeepers under attack is absolutely unacceptable and needs to be halted.”

She urged the Sudanese government to allow “full freedom of access and movements to UNAMID and for humanitarian workers.”

But Rice’s Sudanese counterpart at the U.N. denied any such restrictions imposed.

Sudan’s outgoing U.N. Ambassador Abdal-Mahmood Abdel-Haleem said that there had been “no restrictions whatsoever” placed on UNAMID by Khartoum.

“Indeed, the international civil servants writing such reports reduce the value and credibility of the U.N.,” he told Reuters.

Ban called on Khartoum and JEM “to immediately cease their ongoing military confrontation and commit to the peace process.”

He said that JEM’s withdrawal from peace talks in Doha “has undermined the goal of an inclusive and rapid resolution of the Darfur conflict.”

Without such a deal in Darfur and with south Sudan likely to opt for independence in a referendum scheduled for January, “there is a risk of increasing instability in Sudan,” Ban warned.

UNAMID chief Ibrahim Gambari for his part urged the Security Council to renew its appeal to all Darfur rebel groups to join the Doha peace talks “without any pre-conditions” to finalize a peace deal before the end of the year.

He also pressed the council to appeal to all parties in Sudan “to demonstrate restraint and refrain from actions likely to further complicate the security situation.”

Darfur: Why Insecurity by Proxy has to Stop