July 29, 2010 (KHARTOUM) — The ruling National Congress Party (NCP) today suggested that the 2011 referendum in South Sudan may have to be delayed until the border demarcation process is completed. 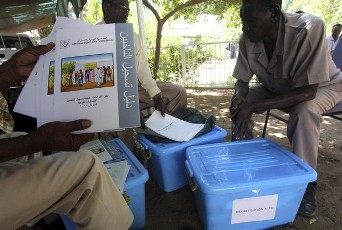 “That is a condition for all referendums around the world that might lead to the creation of a new sovereign state,” Ibrahim Ghandour, a senior official of the National Congress Party (NCP), told Agence France Presse (AFP) today.

Ghandour added that failure to agree on a border could lead to a new conflict and in a separate interview with the BBC gave examples of the conflict between Eritrea and Ethiopia.

Eritrea split from Ethiopia in 1991, but the two countries are still arguing and have fought over the precise border.

This week the Government of southern Sudan (GOSS) representative at the border commission Riak Degol said that it is impossible to complete the demarcation prior to the key vote early next year. He said that the panel will adjourn its activities until next October citing the rainy season which would affect the terrain and logistics.

The Sudan People Liberation Movement (SPLM) was quick to dismiss the condition set by the NCP to conduct the referendum.

“It is in the south’s interest, even more so than that of the north, to demarcate the border,” SPLM leading figure Luka Byong told AFP.

“But we must not confuse what is desirable with what is required,” underlining that it is not necessary to resolve the thorny border question before the vote.

Southern Sudan’s Regional Co-operation Minister Barnaba Benjamin told the BBC that linking the border issue with the referendum was “illogical and unacceptable”.

He agreed that the border must be demarcated but said if this was not done by January, the referendum should still be held as planned.

The SPLM deputy Secretary General, Yasir Arman, said the NCP was not interested in holding the referendum on time.

In Washington, the U.S. administration said that the South is “entitled” to holding the referendum as planned.

Crowley stressed that the NCP needs to cooperate with the South and the international community to complete the referendum.

“[R]ather than trying to put conditions on the referendum, it would be far better for Sudan to cooperate fully, resolve the issues – and there are a number of them – that need to be resolved prior to January. But we believe that these issues can be satisfactorily addressed so that the referendum can happen in January as is planned” he said.

The referendum on southern independence is a key provision of a 2005 peace deal which ended a more than two-decade war between north and south Sudan, a conflict in which two million people were killed.

Most observers expect an overwhelming vote by Southerners for independence driven by bitter memories of the civil war and feeling of marginalization by the Arab-Muslim dominated North.