August 1, 2010 (WASHINGTON) — The leader of a major rebel group in Sudan’s Western region of Darfur warned the embattled African Union-United Nations mission in Darfur (UNAMID) that it will bear the consequences if they allow Sudanese authorities to enter the IDP camps in the wake of deadly clashes that took place this week. 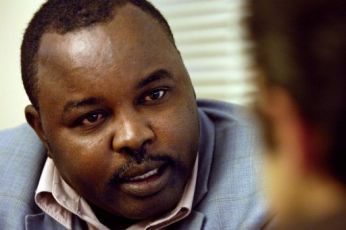 “It is incomprehensible that UNAMID would let those who carried out the genocide against our people to enter the camps which houses their victims. This is a red line and I cannot overstate the repercussions that will result from any such move” said Abdel Wahid al-Nur, the leader of the Sudan Liberation Movement (SLM).

“We collectively as a movement and me personally as a leader have a responsibility to provide for the safety and well being of our people. Should the regime’s forces attempt to enter, the residents will have the right to defend themselves. they will not stand still,” said Al-Nur.

The rebel chief said that during this week’s clashes at the camps, he has urged the IDP’s to maintain calm “which helped avoid further bloodshed”.

“UNAMID and Khartoum must understand that they are playing with fire if they try to make their way into the camp. They have been warned” Al-Nur stressed.

This week, five people were killed in Kalma camp in South Darfur and three in Zalingi camp in West Darfur in fighting reportedly between those loyal to Al-Nur and others who are supporters of the peace process currently underway in Doha between Khartoum and a rebel umbrella, Liberation and Justice Movement (LJM).

SLM-Nur claimed that the government manipulated a handful of people in the camps to fly to Doha as IDP representatives and then enter the camp along with weapons and ammunitions sparking the clashes.

Today the Sudanese president Omer Hassan Al-Bashir was quoted by state news agency (SUNA) as instructing bring those involved in the clashes to justice. The remarks came during his meeting with interior minister Ibrahim Mahmood who accused SLM-Nur of staging the attacks.

South Darfur governor Abdel-Hamid Kasha slammed UNAMID and accused them of protecting the elements from SLM-Nur who are wanted by the state police. He said that officials from the peacekeeping force told him that they have no mandate to protect the IDP’s.

Kasha said that UNAMID police has arrested six of the rioters from SLM-Nur and refused to hand them over.

On Saturday, the Sudanese information minister Rabie Abdulatti told Reuters that UNAMID travel would be monitored going forward and that their bags will be searched. They will have to inform the government before moving on roads even within South Darfur’s capital Nyala, he said.

“UNAMID should adhere to all the normal procedures of the country and respect its sovereignty,” said Abdulatti. “All movement should be in clear coordination with us and no activities should happen without the government’s knowledge.”

He also said the U.N. peacekeepers were sheltering people he accused of stirring up trouble in one camp. “The governor is demanding that these five criminals be handed over within … 48 hours,” he said

The UN Security Council (UNSC) extended the mandate of UNAMID but said that the latter should focus on its security role with some Western diplomats saying that they are unhappy with the mission straying into reconstruction projects or seeking a direct role in attempts to negotiate a political settlement.

“[The UNSC] underlines the need for UNAMID to make full use of its mandate and capabilities, giving priority in decisions about the use of available capacity and resources to (a) the protection of civilians across Darfur, and (b) ensuring safe, timely and unhindered humanitarian access, the safety and security of humanitarian personnel and humanitarian activities” the resolution extending UNAMID mandate said.

“Requests UNAMID in consultation with the UN country team to develop a comprehensive strategy for the achievement of the objectives set out in paragraph 2 above and requests UNAMID to maximize the use of its capabilities in Darfur, in the implementation of that strategy”.

UNAMID reported earlier this month that 221 people had died in tribal fighting and other violence in Darfur in June after nearly 600 deaths in May. UNAMID has lost 27 troops and police since it first deployed.

Sudan says France asked that Bashir not run for elections

Europe urged to learn lessons from Ethiopia on refugee treatment