August 7, 2010 (KHARTOUM) — The Sudanese president Omer Hassan Al-Bashir stepped up pressure on the joint African Union – United Nations mission in Darfur (UNAMID) by threatening to expel them should they attempt to block or hinder the work of the authorities in this country. 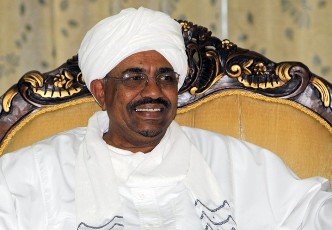 “Any aid group or U.N. or African Union agency, even UNAMID — their mandate is to support government authorities,” he told a gathering of Darfur leaders in Khartoum Saturday.

“I tell my brothers the governors of Darfur that anyone who exceeds these boundaries or their mandate can be expelled the same day” he added.

The directive by the Sudanese leader means that the governors of Darfur states are empowered to issue expulsion orders while at the same time informing the presidency, according to Sudan official news agency (SUNA).

“No one has the right to prevent the government from doing its job to protect civilians,” Bashir said.

“The [Darfur] camps are Sudanese territory under Sudanese authority and there is no authority in this world which can stop the government from … prosecuting criminals who break the law” he stressed.

The remarks appear referring to the unwillingness of UNAMID to hand to Khartoum six IDP’s accused of instigating violence in the Kalma camp in South Darfur.

Clashes broke out in several camps in Darfur reportedly between those who oppose the peace talks in Doha and those who support it. The Kalma camp is located near Nyala, the capital of South Darfur, and is home to about 90,000 people, most of whom are supporters of Sudan Liberation Movement (SLM) headed by Abdel-Wahid Al-Nur Nur. Sudanese government forces targeted the camp in a raid that killed dozens of residents in August 2008.

Al-Nur has warned that any attempt to raid the camp by Khartoum will have dire consequences but said that he had urged the camp residents to maintain camp and stop any further bloodshed.

UNAMID chief Ibrahim Gambari met with Sudanese officials and conveyed to them today that it is in their best interest to drop their demand of handing over the wanted individuals. The mission will not hand over anyone to Sudanese authorities without a set of guarantees, according to talking points obtained by Sudan Tribune on Thursday.

The United Nations say that Khartoum has prevented international aid agencies from entering the Kalma camp and it is believed that it is running short on food and water.

Bashir also ordered governors in Darfur to confiscate weapons and limit it to uniformed forces.

“We decided to stop the war in Darfur and the work on all axes of development and reconciliation and the involvement of everyone, without isolating anyone and unifying energies and efforts to return Darfur to better [state] than it was” he said.

He expressed hope that a solution to the Darfur conflict would be reached before year end.

Darfur has witnessed a growing trend of violence and banditry over the last few months and no quick peace deal is envisioned for the seven years crisis.

The Sudanese president is wanted by the International Criminal Court (ICC) for war crimes and genocide he allegedly committed in Darfur.

He is accused of orchestrating a campaign to wipe out three African tribes in Darfur namely the Fur, Zaghawa and Masaalit through intentionally exposing them to violence and starvation.