September 14, 2010 (WASHINGTON) – The United States today outlined details of incentives it is willing to offer North and South Sudan should they facilitate the successful conduct of referendum due to be held in January 2011 described by U.S. Secretary of State Hillary Clinton last week as a ‘ticking time bomb’ that is widely expected to create the world’s newest state. 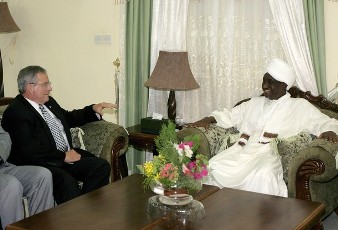 “With fewer than 120 days before the referenda on Southern secession and the future of Abyei, Sudan has entered a critical make-or-break period. U.S. strategic priorities in Sudan remain: full and timely implementation of the North-South Comprehensive Peace Agreement (CPA) that results in a peaceful post-2011 Sudan, or an orderly path toward two separate and viable states at peace with each other; a definitive end to conflict, gross human rights abuses, and genocide in Darfur and that Sudan does not again become a safe haven for international terrorists,” said a statement today by the U.S. State Department.

“Obama’s Special Envoy, Scott Gration, undertook his 20th trip to the region….. he made clear to the Sudanese government that normalization of relations with the United States depends on the full implementation of the CPA and peace and accountability in Darfur. In meetings in Juba, Special Envoy Gration likewise set forth our clear expectations of the Government of Southern Sudan as well as the potential incentives that exist should they complete their obligations under the CPA”.

The statement stressed that both the ruling National Congress party in the North and the Sudan people Liberation Movement (SPLM) in the South were warned that there are “a range of consequences that will be deployed, if the situation in Sudan deteriorates or fails to make progress, including additional sanctions”.

The U.S. as well as many regional and international partners are growing increasingly concerned that preparations for the referendum are lagging severely behind the original schedule stipulated by the 2005 peace accord between the North and South.

The referendum commission was formed in late June and its activities were stalled until last month because of NCP-SPLM quarrel over the post of the body’s Secretary general. It was announced that registration of Southern voters inside Sudan and abroad will commence in October.

Furthermore, the two parties are still negotiating on a number of contentious post-referendum arrangements particularly border demarcation, citizenship, oil, national debt and international agreements. The NCP had said that no referendum shall take place with securing a deal on the borders but the SPLM rejected any suggestion of delaying the plebiscite.

Another referendum is also supposed to be held at the same time in the disputed oil-producing Abyei region on whether it should join the north or south. However, a deadlock over the composition of that referendum’s electoral commission means it is unlikely to happen on time, if at all.

The U.S. state department said that Gration met both sides during his recent visit this weekend “to present a concrete package of steps” that Washington will take in response to “concrete achievements” on the ground.

1. First, an immediate shift in the use of our licensing regulations with respect to the agricultural sector to enhance local food production in a chronically food insecure country and benefit the Sudanese people. The new licensing posture will be subject to regular review.

2. If credible, peaceful on-time referenda occur and the results are respected, the United States will take steps to allow additional trade and investment in Sudan in certain prescribed non-oil sectors.

3. If there is agreement on the key principles for post-referenda arrangements, the United States will support an exchange of ambassadors.

4. And, finally, upon fulfilment of the CPA and resolution of the Darfur conflict, the United States will work with Congress to remove foreign assistance restrictions, lift economic sanctions and actively support international assistance and debt relief, consistent with U.S. law and internationally agreed processes.

Gration said the package, which holds out the threat of additional sanctions against if progress is not made, is aimed at persuading all sides to iron out problems ahead of a planned Jan. 9 independence referendum in southern Sudan.

“What we’re looking at is this historic moment,” Gration told Reuters in an interview, adding that any delays or setbacks to the vote could result in renewed conflict between the Khartoum government and the south of the country.

“We’re in a time when we really need to act now to prevent bad things from happening,” he said.

Gration took the new plan — essentially a roadmap for the normalization of Khartoum’s international relations — to officials in both southern Sudan and Khartoum over the weekend and said it was well received.

The United States placed Sudan on its list of state sponsors of terrorism in 1993 and imposed economic trade and financial sanctions in 1997, which were later supplemented by a United Nations arms embargo.

Last year Washington renewed its sanctions but said it would also seek engagement with Khartoum, earning criticism from activist groups who said the government was dragging its feet on implementing the 2005 peace deal with southern Sudan’s ruling Sudan People’s Liberation Movement.

“The President, and the Obama administration, has taken a really serious look at what we can do now …and [if] there are any incentives that need to put in place, that we do it now,” Gration said.

“What they have now is words on paper. What we want to do is to ensure that these things are implemented in a way that changes the environment,” he said.

The incentives notably do not include a promise to support a UN Security Council (UNSC) resolution freezing the arrest warrant issued by the International Criminal Court (ICC) against Sudanese president Omer Hassan Al-Bashir for his alleged role in war crimes and crimes against humanity committed in Darfur.

Gration said the proposed deal could open up new economic and political opportunities for Sudan, which has long had strained ties with the West.

The envoy said that granting licenses for items such as agricultural machinery to help Sudan’s struggling food sector, relaxing limits in place for about a decade.

“This will communicate to the people of Sudan that we do care about them, in addition it will give confidence that we’re serious about this package,” he said.

Activist groups in Washington welcomed the plans laid by the U.S. administration.

“I’m confident that the balance of pressures and incentives is in the right direction, and that is a significant departure from the past,” said John Prendergast, co-founder of the Enough Project, an anti-genocide group that has been critical of the Obama administration’s Sudan policy.

As part of the intensified US engagement, president Barack Obama will attend a U.N. summit on Sudan next Friday along with U.N. Secretary General Ban Ki-Moon and other high level delegations.