October 25, 2010 (KHARTOUM) — Addis Ababa meeting on Abyei referendum and post referendum issues has been postponed indefinitely, said the former South Africa’s President who brokers the sensitive meeting with US envoy to Sudan. 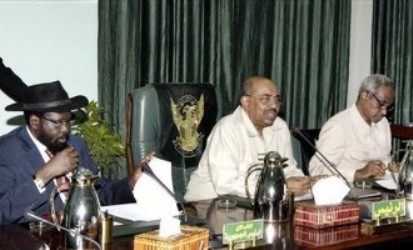 The meeting is supposed to discuss the organization of Abyei referendum and the border demarcation as well as Sudan’s debit. First Vice President Salva Kiir Mayadrit and Vice President Ali Osman Taha had to attend it.

Delegations from the National Congress Party (NCP) and The Sudan people’s Liberation Movement (SPLM) failed to agree on who can participate in the referendum of Abyei which should take place simultaneously with Southern Sudan referendum on self Determination.

The population of the oil rich area has to determine whether they will remain part of northern Sudan or to join southern Sudan if it decides to proclaim an independent state.

South Africa’s former President, Thabo Mbeki who chairs the African Union High Level Panel on Sudan on Monday announced the adjournment of talks between the two partners of 2005 peace agreement scheduled to take place in Addis Ababa on 27 October without indicating when they would meet.

Mbeki who put public the decision after a meeting with President Omer Al-Bashir, said this decision has been taken after consultations with the president and his two deputies.

Nonetheless, he stressed that this postponement will not affect the ongoing preparations to hold the referendum on 9 January as scheduled. He added the parties need more time to agree on the agenda of the talks.

“We saw that it is important to prepare properly for that meeting because it should solve a number of problems. One of them is of course is the problem of Abyei besides other broader issues which relate to ensuring that there is a framework that would deal with all outstanding issues,” Mbeki said.

“We will agree later as to when that meeting will take place,” he further said.

Already last Friday following a meeting in Juba with the president of southern Sudan government, Mbeki warned that it was too early to say when the two delegations will resume talks.

“For now, it’s too early to speculate on when the talks on Abyei will resume. The schedule will depend on the outcome of the ongoing consultative meetings with the two parties to the Comprehensive Peace Agreement,” Mbeki told journalists in Juba.

The Northern Sudan NCP wants the participation of cattle herders Misseriya people who used to be present in Abyei for grazing some months every year while the SPLM says the Dinka Ngok have to decide on the future of their land without the Arab tribe.

Speaking Monday at a meeting of the UN Security Council, Sudanese ambassador at the international body warned that conducting the referendum without an agreement with the NCP and the formation of the commission means return to war.

“It is evident that any attempt to conduct the plebiscite before achieving an acceptable settlement between the two parties will mean only a return to war,” said Daffa-Allah Elhaj Ali Osman.

The Sudanese presidency on the other hand postponed a meeting scheduled on Monday evening between president Bashir and vice-presidents Kiir and Ali Osman.