February 23, 2012 (KHARTOUM) – The United Nations (UN) has imposed a moratorium on helicopter flights between Sudan’s heavily militarised regions of South Kordofan and Abyei after one of its aircrafts came under fire. 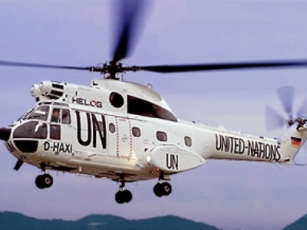 According to the UN Office for the Coordination of Humanitarian Affairs (OCHA), the incident occurred on 16 February as the helicopter was approaching Kadugli airport in South Kordofan on the way from the disputed Abyei region.

OCHA said on Thursday that the crew found a bullet hole underneath the aircraft but no one was injured and the helicopter later returned to Abyei.

“Consequently, UN flights between Abyei and Kadugli have been suspended pending an investigation” OCHA’s bulletin stated.

South Kordofan has been the scene of a conflict between government forces and rebels who fought as part of the army of neighbouring South Sudan before it seceded from Sudan in July last year. The conflict, which erupted in June and later spread to Blue Nile State, has displaced 417,000 people according to UN estimates.

Abyei which neighbours South Kordofan is a disputed territory claimed by Sudan and South Sudan. But the hotly contested region is currently controlled by the Sudanese army which occupied it in May last year in retaliation for an attack reportedly launched by southern troops.

The UN says neither Sudan nor South Sudan have fulfilled their commitment to withdraw troops from Abyei as stipulated under a deal they signed in the Ethiopian capital Addis Ababa last year.

Also present in Abyei are 3,800 Ethiopian peacekeepers serving under the the UN’s Interim Security Force for Abyei which was established under the same deal.