July 28, 2012 (KHARTOUM) — France urged Darfur rebel groups to join the Doha Document for Peace in Darfur (DDPD) and to end the escalation of violence in western Sudan. 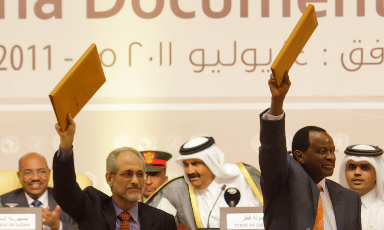 The call comes following a discussion by the UN Security Council of a report by the hybrid peacekeeping mission (UNAMID) covering the period of 15 April to 15 July 2012 ahead of the renewal of its mandate.

UNAMID chief Ibrahim Gambari told the Security Council that the surge of clashes occurred between government forces and rebels during the reported period particularly in South and East Darfur states near the border with Bahr el-Ghazal region in South Sudan.

“France is concerned by the recent deterioration of security situation in Darfur, due to the increase of and armed attacks by rebel movements,” said Bernard Valero French foreign ministry spokesperson on Friday.

The French diplomat pointed out that Darfur crisis can only be resolved through a negotiated political solution. He further called on the holdout rebel groups to join the Doha peace process “without delay”.

Paris sought in the past years to play a significant role in the resolution of Darfur crisis and supported the Doha process as it was concerned by the impact of the conflict on Chad.

Sudanese government and the former rebel Liberation and Equality Movement signed the DDPD, on 14 July 2011. The frame work agreement remains open for the other rebel groups to join it. but the rebels demand a comprehensive process.

Fighters of the rebel Justice and Equality Movement (JEM) attacked several positions of the Sudanese army in South Kordofan on 23 July.

Just three days before the attack, the south Sudanese government accused Khartoum army of bombarding some positions in Northern Bahr el Ghazal state and suspended briefly talks over the outstanding issues to protest the attack. The Sudanese army said it had bombed JEM rebels inside its territory.

The attack, which a UN investigation team confirmed its occurrence inside the south Sudanese territory, fall short to collapse the process. But JEM rebels said staged the attack from the neighbouring North Darfur state.

“France condemns the bombings which also affected the territory of Southern Sudan and several civilian casualties in last weekend. It reminds the parties of their obligation to respect the cease-fire and the provisions of resolution 2046 the Security Council,” Valero said.

The French official, on the other hand, urged Khartoum and Juba to settle the unresolved issues before the deadline of 2 August.

He stressed the need for a compromise and encouraged them to agree on the disputed issue reminding that the Security Council reserves the right to impose sanctions on both sides, if no significant progress was observed by 2 August.

US, UK move to get UN troops into Darfur

UN Ban Ki-Moon and his drought thesis of Darfur Conflict