4 Min
October, 12, 2012 (JUBA/KHARTOUM) – The European Union (EU) has been awarded this year’s Nobel Peace Prize, in what its top leadership described as the “strongest possible recognition of the deep political motives” behind their activities. 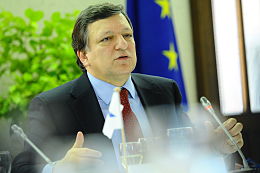 In a joint statement, Herman Van Rompuyand, the President of the European Council and José Manuel Barroso, President of the European Commission said the 2012 Nobel award is a “tremendous” honour for the EU. “(..)the unique effort by ever more European states to overcome war and divisions and to jointly shape a continent of peace and prosperity. It is a Prize not just for the project and the institutions embodying a common interest, but for the 500 million citizens living in our Union,” the joint statement said. The EU, has over the last 60 years, played a crucial role in the reunification of the continent after split by the Cold War around values of respect for human dignity, freedom, democracy, equality, the rule of law and respect for human rights. “These are also the values that the European Union promotes in order to make the world a better place for all,” the statement adds. This Nobel Peace Prize, it further noted, is an indication that the EU, even in difficult times, remains an inspiration for leaders and citizens all over the world, while pledging to continue to promote peace and security in countries closer to them and in the world at large. Catherine Ashton, the High Representative of the EU for Foreign Affairs and Security Policy said she was delighted at the news that the EU had been awarded the 2012 Nobel Peace Prize, in recognition of its work on reconciliation, democracy, promotion of human rights and in enlarging the area of peace and stability across the continent. “We are proud that the European Union is the world’s largest provider of development assistance and humanitarian aid and is at the forefront of global efforts to fight climate change and promote global public goods,” Ashton, who is also Vice-President of the Commission, said. The EU, she added, through the creation of the European External Action Service managed to develop a comprehensive approach to better promote Europe’s core values throughout the world. Meanwhile, Ambassador Tomas Ulicny, Head of EU delegation to Sudan said the award was recognition of the body’s success to achieve more than fifty years of “unity, peace, development and progress.” He specifically cited the EU’s support to the peace deal signed in Addis Ababa, the Ethiopian capital last month, and pledged its firm commitment to help both Sudan and South Sudan benefit from the dividends of peace. EU CRITICIZED Reacting to the award, the US-based Human Rights Watch (HRW) said the Nobel Peace Prize should prompt the EU and its members to do more to defend rights at home and abroad, stand up for victims, expose abusers, and ensure justice for serious crimes. “To date, the EU and member states have often proved unwilling to tackle human rights abuses at home, including inadequate protection for migrants, discrimination against Roma, deteriorating media freedom, and racist violence,” HRW said in a statement. The rights body urges the EU, as part of its foreign policy, to play the role of a “forceful” defender of human rights around the world, which 27 of its foreign ministers committed to do when they adopted a comprehensive human rights package in June. Hindu statesman Rajan Zed has strongly criticized awarding of Nobel Peace Prize to EU, calling it highly “illogical and irrational” in view of continuing apartheid conditions of its about 15-million Roma (Gypsy) populace. On the other side, in a statement issued on Saturday, Zed, who is President of Universal Society of Hinduism, says the EU had failed to “really” grant human rights to Roma which were available to other Europeans. (ST)