November 26, 2012 (KHARTOUM) – Two Iranian navy warships will dock in Port Sudan along with a Pakistani one this week, the army spokesperson Colonel Al-Sawarmi Khalid Sa’ad said today in the second visit of its kind in a month. 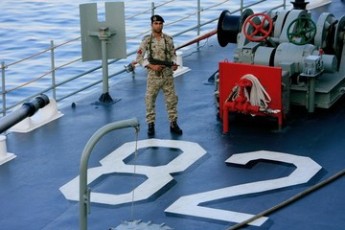 Col. Sa’ad told state media that the ships will anchor in the framework of cooperation of navy and military cooperation with countries around the world in diplomatic, social and political areas.

The military spokesperson said the ships will stop on the 29th & 30th of this month and will stay for three days for reasons including logistics and refueling. He stressed that this is part of the routine and normal activities of Sudanese navy.

Last month an Iranian destroyer and a helicopter carrier docked in Port Sudan only few days after Khartoum accused Israel of carrying out an airstrike in the Sudanese capital.

Sudanese officials at the time denied any link between the visit and the alleged Israeli airstrike. They also rebuffed Israeli accusations that Sudan is serving as a hub for Iranian weapons headed to militants in Gaza strip controlled by Hamas.

But in a sign of internal split over ties with Iran, Sudan foreign minister Ali Karti criticized in a TV interview his government’s decision to allow the ships to dock in Sudan. He revealed that government took by his recommendation earlier this year and refused to grant permission to Iranian ships.

“In February [of this year] these ships came and asked that it [be given permission to] anchor in Port Sudan and we got this request formally in the ministry of foreign affairs,” Karti said earlier this month.

“The view of the Sudanese foreign ministry that these ships should not [be allowed] to dock and we spoke with the Defense Minister and submitted our opinion to the President of the Republic and the decision [was made] that these ships are not to dock [in Port Sudan]” he added.

Karti said that he found about the Iranian warships visiting the country “through the media” adding that he was not consulted this instance.

He warned that Sudan’s relationship with Iran are viewed suspiciously by Arab Gulf states and hinted that it is in his country’s interest to downgrade ties with Tehran.

Eight killed in another revenge attack in Lakes State

Sudan rebel leader hopes to be “soon in Khartoum”