December 11, 2012 (KHARTOUM) – The main coalition of opposition parties in Sudan, the National Consensus Forces (NCF), has urged citizens to participate in a sit-in planned to be held on Wednesday to protest the death of students who were allegedly killed by loyalists of the ruling National Congress Party (NCP). 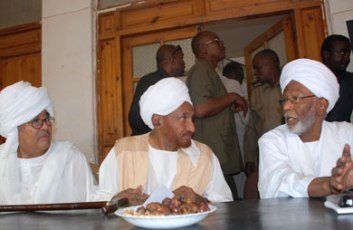 Four university students originally from the western region of Darfur were found dead in a canal on 7 December after they went missing during a crackdown by security forces and NCP loyalists on a sit-in organized by Darfur students at Al-Gazira University to protest the refusal of the university administration to waive their tuition fees as arguably stipulated under a peace deal signed by the government to end a nine-year conflict in the region.

Their death, which the government said was caused by drowning in the canal, has sparked a wave of student demonstrations in different universities across the country for the last three days. On Tuesday, NCF leaders held a sit-in in front of the headquarters of the opposition Sudanese Congress Party (SCP), where they shouted slogans calling for retribution and called on citizens to take part in another sit-in planned to be held today at Khartoum University.

In a press conference on the same day, NCF’s chairman Farouq Abu Issa said that opposition parties have decided to mobilize the masses and stand in solidarity with the issue of students. “We urge citizens to go to Khartoum University tomorrow to express solidarity with the victims.

He added that the NCF plans to set up a morning pavilion at the headquarters of the opposition National Umma Party (NUP) in Omdurman to receive condolences on the deceased students.

The planned action is expected to lead to confrontation in light of the heavy deployment of police and security forces in Khartoum. The authorities already arrested a number of activists and demonstrators during the protests that have been going on in Khartoum since Saturday.

October 24, 2021 (KHARTOUM) - Supporters of the ousted regime tried to occupy the building of the Sudan News Agency and the Ministry of...

October 23, 2021 (KHARTOUM) - Yasir Arman, a member of the leadership of Forces for Freedom and Change (FFC), rejected calls by the military...