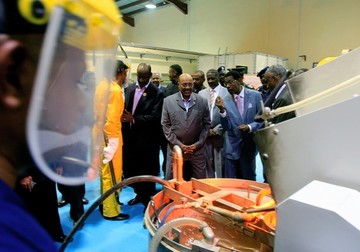 No reason was given for the decision but the report stated that CBoS will focus on developing marketing channels for it locally through the establishment of precious-metals exchange in Sudan.

Gold mining firms will be allowed to export in line with CBoS policies and only after refining it in the newly built Khartoum refinery.

The government had said that the state-run refinery opened last Septemberin the capital will help reduce the amount of ore smuggled overseas to places such as Dubai. Producers would receive more money for the higher-quality gold, reducing the incentive to smuggle, the state says.

CBoS has tried to end smuggling by buying up gold from local traders, even above market prices, according to industry sources speaking to Reuters.

Sudan says that gold production hit 34 tonnes this year through September compared to 10 tonnes during the same period in 2011.

The East African country is looking for gold to make up for the budget deficit it incurred as a result of losing three quarters of its oil production due to the secession of South Sudan in July of last year.

Sudan hopes to sell 50 tonnes of gold worth up to approximately $3 billion this year, double last year’s gold revenue.

Sudan inflation rate down in February