January 18, 2013 (WAU) – Authorities in South Sudan’s Northern Bahr el Ghazal on Friday denied reports linking the arrest of a local youth leader to his opposition to a border area being included in a buffer zone with Sudan, which was agreed in a Cooperation Agreement signed in September last year. 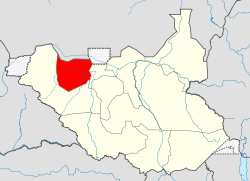 The Northern Bahr el Ghazal administration said Friday that Garang Velantino Wol Kon Amoi, the chairperson of the state’s Sudan People’s Liberation Movement’s (SPLM) Youth League, was detained because he “misbehaved” and “refused to observe [an] order” from local police.

Amoi, who was released on Monday evening having been for over 24 hours by local police, claims he was stopped and arrested without being notified of the reason or given a letter of arrest, as he returned home after attending a youth meeting in Awiel, the state capital.

The youth leader told Sudan Tribune that he spoke to the state Deputy Governor, Madut Dut Yel, and other high ranking officials and officers, including the state police commissioner, Major General Akot Deng Akot prior to his release.

Jacqueline Nyibol Benjamin Ajonga, the state Minister of Information plainly denied on Friday that the arrest was in any way related or connected to reservations Amoi and others have raised over the border area known as “14 miles”.

“The arrest has nothing to do with 14 miles area. It was misconduct. He harassed police and refused to stop when he was asked”, Ms. Ajonga told Sudan Tribune by phone from Aweil town.

The minister, however, could not explain why the police allegedly did not follow normal legal procedures while arresting the youth leader.

Many key figures in the state, including its Governor, Paul Malong Awan have criticised the inclusion of Mile 14 in the Safe Demilitarize buffer zone (SDBZ), which the two countries agreed to operationalise to ease tensions on the largely un-demarcated border.

At a summit earlier this month, the Presidents of Sudan and South Sudan agreed to pull back their force 10km from the border to establish the buffer zone. South Sudan announced this week that its troops were withdrawing from the border – a move that is central to the agreement that could lead to South Sudan resuming exporting oil through Sudan for the first time in over a year.