January 30, 2013 (LONDON) – South Sudan slipped 12 places in the annual press freedom index published by Reporters Without Borders (RWB) on Wednesday, leaving it at 124th out of the 180 countries ranked. 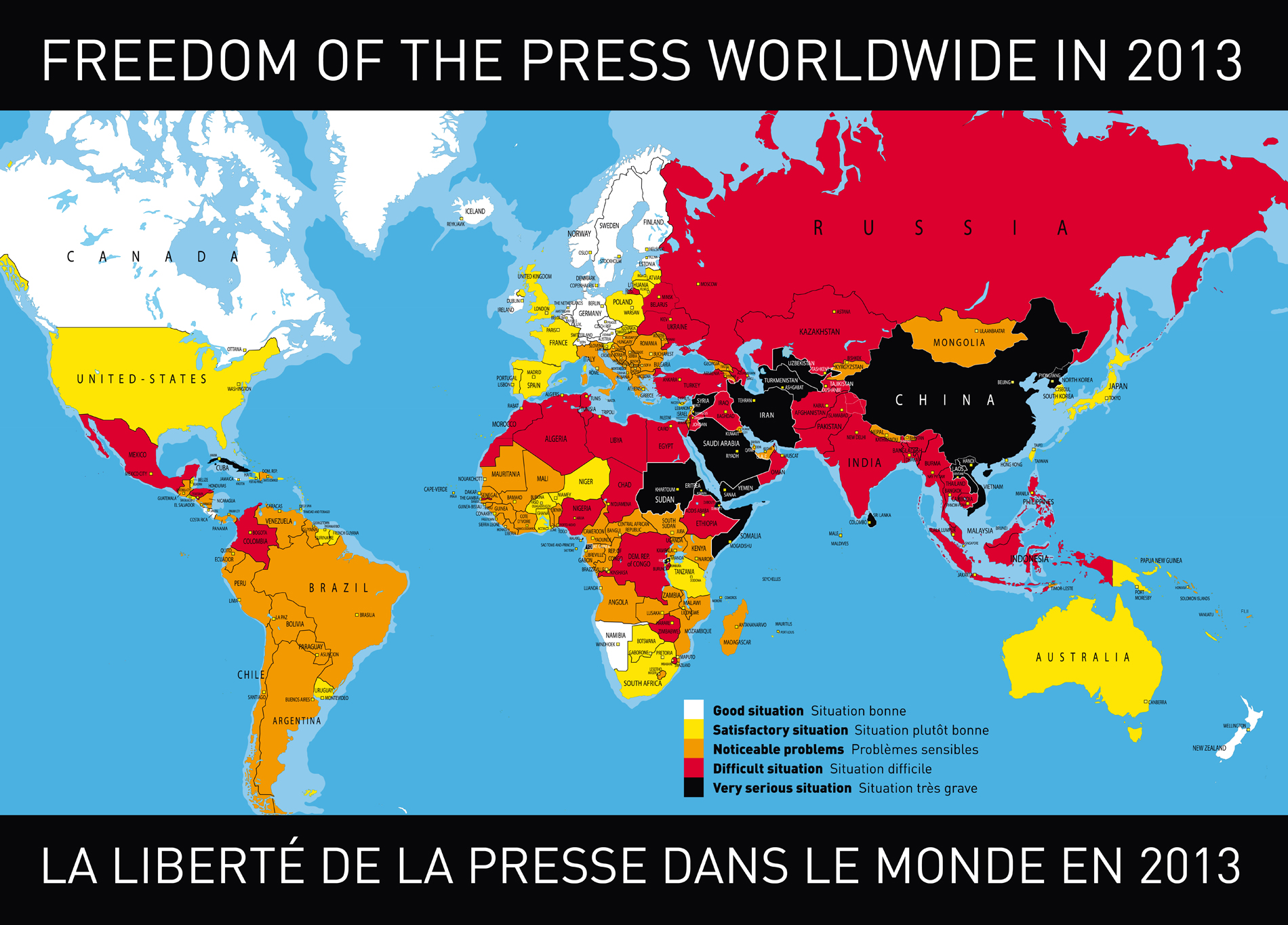 Chief among the reasons for South Sudan’s slide down the table was the murder of a columnist in Juba on 5 December – the first journalist to be killed in the country since separating from Sudan 18 months ago.

In comments made to Al Jazeera, the international media watchdog had warned earlier this month that South Sudan’s ranking was likely to fall due to the general heavy handedness of security forces in dealing with journalists and the killing of Isaiah Abraham, who had been a strong critic of the government in his regular opinion pieces published in Sudan Tribune and other news outlets.

RWB told Al Jazeera that the young nation’s press freedom issues are due to the attitude and bad habits of many members of the government and security services.

This disdain for journalists can be partly attributed to the experience of being ruled by the Khartoum government, RWB said. In the 2013 press freedom league Sudan remained the 170th worst offender out of the 179 countries included.

As well as fighting successive Khartoum governments in two civil wars since Sudan’s independence from Anglo-Egyptian rule in 1956, southern Sudanese politicians, the press freedom organisation said, had also been influenced during periods when they were part of power-sharing governments.

Most recently, South Sudan’s former-rebels-turned-governing-party – the SPLM – shared power with Sudan’s ruling National Congress Party (NCP) for six years as part of a 2005 peace deal that led to the South opting to secede in 2011.

Shortly after South Sudan declared independence the Committee to Protect Journalists (CPJ) reported that “local journalists fear the former rebels turned government officials who still harbor a war mentality that is unaccustomed to criticism, and that they are not prepared to extend the freedoms they fought hard to attain”.

Since Abraham’s death, Sudan Tribune‘s reporters in Juba have observed a decrease in the amount of comment critical of the government appearing in South Sudan’s press.

As Sudan Tribune reported two weeks ago, many South Sudanese writers live in fear and receive threats both in person from the security services and anonymously over the phone.

There are hopes that when South Sudan passes long awaited media legislation the rights of journalists and publishers will be clearer and not left to the whim of politicians and the security services.

South Sudan was not the only nation to fall significantly in this year’s rankings, with Chad and Zimbabwe by 18 and 16 places respectively. The RWB reports also found that East Africa was stagnating near the bottom of the index:

In Somalia (175th, -11) 18 journalists were killed, caught up in bomb attacks or were the direct targets of murder, making 2012 the deadliest in history for the country’s media. The Horn of Africa state was the second most dangerous country in the world for those working in news and information, behind Syria. In Eritrea (in last place in the index for the sixth successive year), no journalists were killed but some were left to die, which amounts to the same thing. With at least 30 behind bars, it is Africa’s biggest prison for journalists. Of 11 incarcerated since 2001, seven have died as a result of prison conditions or have killed themselves. Since the independent media were abolished more than 10 years ago, there are no independent Eritrean news outlets, other than outside the country, and terror prevails.

East Africa is also a region of censorship and crackdowns. Omar al-Bashir’s Sudan, where more newspapers were seized and the arrests of journalists continued during the summer, is stuck firmly in 170th place, in the bottom 10 of the index. Djibouti (167th, -8), which also has no independent media, detained a correspondent of the foreign-based news site La Voix de Djibouti. Despite the release of two Swedish journalists arrested in 2011, Ethiopia(137th) fell 10 places because of its repressive application of the 2009 anti-terrorist law and the continued detention of several local journalists.

You can read the full report here: RSF: East Africa stagnates near bottom of the index, Mali nosedives

‘Save Darfur’ says Sudan election will not be legitimate