February 11, 2013 (KHARTOUM) – The International Committee of the Red Cross (ICRC) announced Monday the arrival in Juba of five South Sudanese soldiers that Sudan handed to the international group on the same day.

The Sudan Armed Forces announced on 6 February that five soldiers from the South Sudanese army (SPLA) would be released on 11 February in Nyala, after their arrest in Kafan Dibi in South Darfur state.

“An aircraft belonging to the International Committee of the Red Cross (ICRC) arrived in Juba today with five South Sudanese ex-prisoners of war aboard”, said a statement released by the group.

It further said that an ICRC delegate accompanied the five prisoners of war.

“We are glad that these five men were able to return to their country,” said Jean-Christophe Sandoz, head of the ICRC delegation in Sudan.

The ICRC has been working since 1978 in Sudan. It opened a delegation in South Sudan in 2011 after the independence of the new country in July 2011. 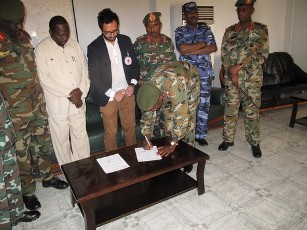 Sudan had said the five soldiers were captured in mid-2012 in an area called Kafan Dibi, which is part of South Darfur state, during an incursion attempt by the SPLA. It is one of the border regions that are in dispute between Khartoum and Juba.

Darfur rebels fighting Khartoum since 2003 reportedly managed to occupy Kafan Dibi briefly in May of last year before the SAF recaptured it.

Sudan accused SPLA of taking part in the fighting alongside the rebels.

The Sudanese army said releasing the POW’s was made as a gesture of goodwill and urged Juba to do the same and free SAF prisoners in its custody.

Khartoum and Juba accuse each other of supporting rebel groups either side of the border. Also there are several zones on the common border the two parties claim. They have failed to activate a buffer zone they agreed on in September 2012.

Sudan’s president extends cessations of hostilities for one month