March 29, 2013 (JUBA) – The US-based Carter Center has launched a series of dialogues between prominent leaders from Sudan and South Sudan, aimed at strengthening peace and creating lasting understanding between the two countries. 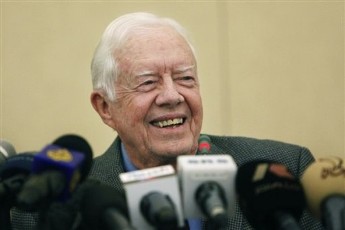 The one-year project, in partnership with the Khartoum-based Future Studies Center and the Ebony Center for Strategic Studies in Juba, will reportedly provide a forum for key individuals to produce practical and achievable ideas toward those goals.

The non-governmental dialogues, the Cater Center said in a statement, will be facilitated by General Lazaro Sumbeiywo, the chief mediator of the 2005 Sudan Comprehensive Peace Agreement (CPA), which ended over two decades of the north-south Sudan civil war.

The initiative, the Carter Center said, will complement ongoing international and regional peace efforts between the two countries, under the auspices of the African Union (AU).

“The Carter Center aims to support progress already being made toward implementing the nine agreements reached in September 2012 to resolve issues about oil, citizenship, and border security,” said Itonde Kakoma, the Assistant Program Director at the Carter Center.

Relations between Sudan and South Sudan have been tense ever since the latter seceded from former in July 2011 as part of the 2005 peace deal.

However, the two countries early this month agreed on immediate and unconditional withdrawal of forces to their side within two weeks, to allow for establishment of a safe demilitarized border zone.

Both countries also committed themselves to the deployment of the Joint Border Verification and Monitoring Mechanism (JBVMM) and the activation of all security related mechanisms, effective from 10 March.

In September last year, Sudan and South Sudan signed a Cooperation Agreement, which covered oil and citizenship rights as well as security issues, among others. Since then, however, implementation of the deal has stalled over Khartoum’s insistence that Juba sever all ties with Sudanese rebel groups – an allegation South Sudan denies.