September 19, 2013 (RUMBEK) – Thousand of students from Rumbek in South Sudan’s Lakes state have elected new union leaders in a vote on Saturday in the Ugandan capital of Kampala. 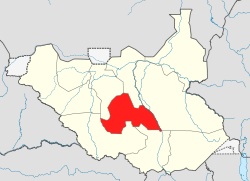 The Kampala branch of the Rumbek Youth Union (RUMYU), is a popular among students as it has brought together the counties of Rumbek North, Rumbek East and Rumbek Central.

Over 1,000 students turned out to see the two candidates put forward their manifestos at the Calendar Hotel.

The body tasked with conducting the election was headed by Gordon Mayom Makueng, who declared Majak Malok Makoi the winner with 59.3% of the votes cast. His rival, Maker Majak Malok, obtained 37.2%.

S. Sudan refugees continue to stream into Ethiopia despite truce