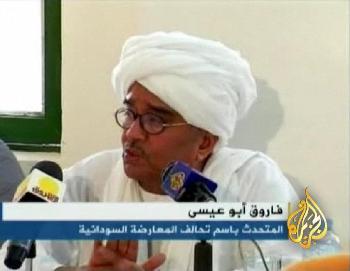 The PCP general secretariat held a meeting several hours before the speech and approved participation of Turabi and senior party leaders leading to intense fury among NCF parties.

Reliable sources told Sudan Tribune that NCF chairman, Farouq Abu-Issa, expressed anger over the PCP’s move, criticising Turabi for agreeing to listen to a speech delivered by a president who the NCF decided to topple his regime.

The PCP split from the NCP following 1999’s bitter power struggle between Bashir and Turabi, with the latter was ousted from his post as parliamentary speaker.

Turabi later established the PCP and has since been a vociferous critic of the very regime whose army-backed seizure of power in 1989 he orchestrated.

The same sources suggested that secrets meetings were held between Turabi and Bashir under pressure from the United Sates leading to Turabi’s acceptance to attend.

The PCP political secretary, Kamal Omer, during a meeting of the NCF, defended his party’s decision stressing the role they played in strengthening the opposition alliance.

The Sudanese Congress Party (SCP) official spokesperson, Abu-Bakr Youssef, told Sudan Tribune on Monday that participation of the PCP and Justice Party in the presidential speech doesn’t represent the NCF.

The NCF said in a press statement on Monday that it rejected NCP invitation, saying the ruling party is manipulating national issues and doesn’t seek to engage opposition forces in a genuine national process to achieve peace, democracy, and freedom.

The statement further stressed the NCF forces are united and have agreed on the national democratic alternative program which includes a transitional constitution and government in order to dismantle the NCP government and conduct free and fair elections.

The Arab Socialist Ba’ath Party (ASB) spokesperson, Mohamed Diaa Al-Deen, posted on his Facebook page that NCP political secretary Mustafa Osman Ismail, has invited them to the event, but they turned it down because it was not for dialogue but to listen to the president.

Sudan summons its ambassador to Qatar