November 25, 2015 (WAU) – South Sudan’s Western Bahr el Ghazal state has signed an agreement with the Sudan University of Science and Technology (SUST) on purchase of land which is worth hundreds of millions of money construct its branch in South Sudan. 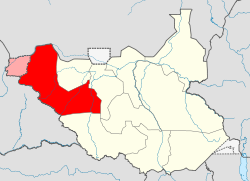 The deal, in the form of a Memorandum of Understanding (MoU) was reached this week in the capital, Wau town, between the state ministry of physical infrastructure and urban construction. The University’s land is located in Bussere area, southern part of Wau town.

Roman explained that the MoU was signed in order to allocate a piece of land for the site of the University adding that “the project will be an actual development for the education sector in the state.”

He also assured full support to the SUST administration in implementation of the project.

“The cost of the project ranges between Five Hundred Million to One billion USD, and this expense will be met by the University,” said Elario the coordinator of the University.

Elario said the University will consist of 15 colleges of various fields and that the signing of the MoU means the immediate commencement of the project implementation.

He said that a delegation of the Sudan University will soon arrive to the state for more consultations.

Earlier this year, the Sudan University of Science and Technology had expressed plan to put its branch in Western Bahr el Ghazal state as part of its expansion policy.