December 1, 2015 (KHARTOUM) – A group comprised of twelve Sufi leaders has begun a two-week visit to the United States as part of a cultural exchange programme to promote dialogue between the Sudanese and the American people. 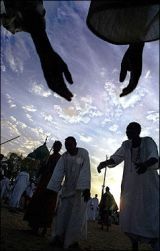 The visit comes within the framework of the partnership between the U.S. embassy in Khartoum and the Sudanese businessman Isam al-Sheikh who is sponsoring a popular initiative for direct contacts between the two peoples.

Last June, a delegation from Sudan’s native administration including 14 tribal chiefs visited Washington and held meetings with congressmen and the state department officials urging the U.S. administration to lift the economic sanctions imposed on the country.

Sudan is on the U.S. list of countries supporting terrorism since 1993 and also subjected to economic sanctions since 1997.

The Sufi leaders are expected to visit Washington and two other states to meet with government officials, local leaders, academics, civil society representatives and ordinary citizens.

The delegation would also meet with the American Moslem leaders to learn about the role of Islam in a diverse society.

The visit is expected to encourage positive engagement between Sudan and the US as well as promoting peace, tolerance, conflict resolution and interfaith dialogue.

It is noteworthy that the U.S. embassy in Khartoum has expressed commitment to promote bilateral ties through the educational, professional and cultural exchange programs as well as public diplomacy initiative.