South Sudanese opposition faction says for states based on federalism

December 31, 2015 (ADDIS ABABA) – The recently established 28 states have not been based on federalism which has been the popular demand of the people of South Sudan for several decades, says the armed opposition faction of the Sudan People’s Liberation Movement (SPLM-IO) led by former vice-president, Riek Machar. 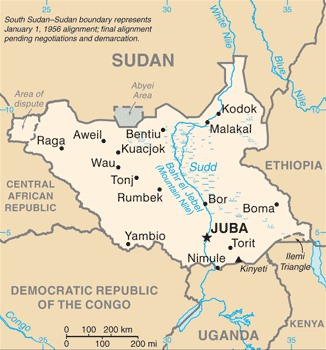 Officials of the opposition were responding to an argument by the government that the 28 states were created in response to the interest and calls from the people for more states.

“The government is attempting to fool the people. Their 28 states proposal is not federalism. This is the reason the unilateral amendment by the national legislature is silent about federalism. They have shied away from enshrining federalism in the constitution when they amended it in favour of creation of more states,” said James Gatdet Dak, opposition leader’s spokesman.

“The government still calls the system decentralization, but with more states. It is the same old system multiplied,” he said.

The opposition leadership, he said, maintained the call on President Salva Kiir to reverse his decision which he said is a violation of the peace agreement based on the constitutionally recognized 10 states.

He said the opposition does not recognize the 28 states and will implement the peace agreement based on the 10 states.

Dak, however said the SPLM-IO is committed to the implementation of the peace agreement and would not want to derail it, adding it will address the matter through the right forums such as constitutional amendment or making processes as stipulated in the peace agreement.

He also dismissed claims from the government that it only added 7 states to the initial proposal of 21 states by the SPLM-IO during the peace negotiations in Addis Ababa, saying there was a big difference.

“No, there is a big difference. Our proposed 21 states have been studied and are based on 21 former colonial districts with historical boundaries. We also base their creation on federal system of governance. Again, the government did not take all the 21 states exactly as we proposed them and added 7,” he said.

He also argued that another difference in approach was that the SPLM-IO tabled their proposal to the peace talks with the government, which he said the government rejected and could not come up with a counter proposal of 28 states for discussion, amendment or endorsement, forcing the parties to sign the agreement on the basis of the constitutionally recognized 10 states.

The majority of the 28 states, he added, are problematic as they encourage tribal segregations and don’t have historical known boundaries and therefore serve as a recipe for future conflicts between communities whose lands have been taken away and given to other communities.

The creation of 28 states, according to him, are also an attempt by the government to reopen the peace deal for renegotiation, dismissing government’s claim that the SPLM-IO will simply be given governorship positions of the new states curved from the previous two states of Unity and Upper Nile, plus their 40% of executive power sharing in the two states plus Jonglei’s new three states, excluding Boma state.

“First of all, we did not agree with the government on how many more states to be created and on which basis. So why would they unilaterally decide on behalf of the rest of the parties to the peace agreement? This is a serious violation. Second, 28 states will alter the power sharing agreement and reopen the accord for renegotiation,” he added.

He said there would be not only 28 executives now, but 28 state legislative assemblies, explaining that the peace agreement only provided for reinstatement and reconstitution of former elected members of state assemblies.

Now that more state assemblies would be created from the scratch, this would in violation of the agreement need renegotiation on how to share the membership of the new state assemblies.

Dak also said the membership of the Council of States in Juba would be affected by the change from 10 to 28 states, and this would require another negotiation on representation to the upper house from the new states, among others.

To avoid the situation of renegotiating the agreement, he said, the matter will be tackled through the Joint Monitoring and Evaluation Commission (JMEC) so that the government would be told to reverse or suspend its 28 states and to keep it as a proposal for tabling during the constitutional amendment or making process.

He said the SPLM-IO would stick to the 10 states in the agreement and called on the international community to exert pressure on the government to suspend its unilateral action, arguing that there was no need for such actions when the opposition advance team was already in the national capital, Juba, to implement the agreement with the government.

October 26, 2021 (JUBA) - A prominent civil society leader in South Sudan has decried a military takeover in Sudan, pointing it creates a...

October 25, 2021 (ADDIS ABABA) - The Ethiopian government has called on all parties for calm and de-escalation in Sudan, further stressing the need...
Advertisment