July 12, 2016 (JUBA) – The Swiss Agency for Development and Cooperation (SDC) has temporarily closed its offices in South Sudan and evacuated its staff from the nation following the recent clashes. 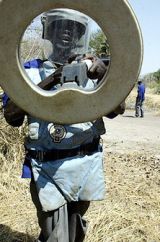 Two Swiss workers have reportedly left the SDC’s cooperation office in the capital Juba, and the three staff in the project office in Northern Bahr el Ghazal are expected to leave the young nation as soon as possible, the Swiss foreign ministry said Wednesday.

Resumption of activities, SDC said, will depend on security situation in country. Until then, the programme will be run from abroad, it said.

South Sudan has reportedly been a priority country for Swiss Humanitarian Aid since the nation became independent in July 2011.

Currently, some 30 Swiss citizens are reportedly in South Sudan, most working for international organisations and charities. The Swiss foreign ministry has repeatedly urged Swiss nationals to leave the world’s youngest nation and discouraged trips to South Sudan since 2013.

In five days of fighting in Juba, President Salva Kiir’s forces ousted those loyal to First Vice President Riek Machar, the former rebel leader in the country’s recent civil war, from one of their Juba bases.

The fighting left hundreds dead in the capital, and aid workers said bodies remained in the streets. The South Sudanese government said up to 272 people, including 33 civilians, although the death toll is likely to be much higher, United Nations peacekeeping chief, Hervé Ladsous said on Wednesday.

“I would believe that this is only the tip of the iceberg, given alarming reports over the last few days indicating many civilians were barred from reaching safer ground,” Ladsous told the 15-member UN Security Council.

Sudan’s FM to visit Japan for talks on Darfur crisis