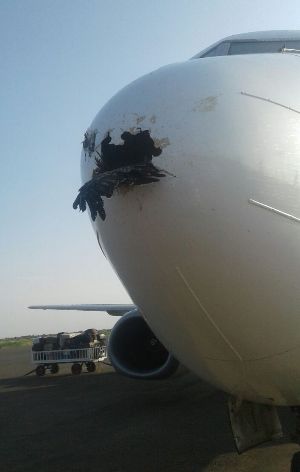 September 10, 2016 (EL-FASHER) – An airplane belonging to Sudanese private company, Tarco was hit by a bird on Saturday shortly before landing at El-Fasher airport in North Darfur state.

The aircraft, however, landed safely and no passengers were hurt.

An official at the company told Sudan Tribune that Tarco flight 400 was heading from the Sudanese capital, Khartoum to El-Fasher when it was hit by a bird on the nose of the aircraft, saying however the passengers weren’t harmed.

He pointed that the company was forced to send another plane from Khartoum to carry the passengers from El-Fasher to Khartoum on the return flight.

El-Fasher airport is considered one of the major airports in Sudan and it is the largest airport in Darfur.