NAIROBI, Kenya, Sep 6, 2004 (PANA) — Sudanese Parliamentarians and senior
government officials are due in Nairobi Tuesday to hold
discussions with Kenyan government officials on the worsening
security situation in the western region of Darfur Arab militias
are accused of killing civilians. 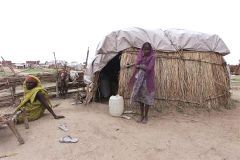 According to the official, the delegation is expected to pave the
way for the resumption of talks between the Khartoum Government
and the Sudan People’s Liberation Army/Movement (SPLA/M) aimed at
reaching a final peace deal for Sudan, embroiled in 24 years of
bloody civil war.

Deputy Parliamentary Speaker Anglo Beada, accompanied by Al
Zubeir Bashir Taha, minister of Science and Technology, Mahadi
Ibrahim, deputy Secretary General of the ruling National
Congress Party and Mohammed Bakhi, chairman of the Defense and
Security Committee in Parliament are among the key officials in
the team.

Political analysts keenly following the progress in the Sudan
peace process suggested that the meeting is part of a wide scheme
by Khartoum to drum up political support from its neighbouring
countries.

“The Sudanese government has sent several other delegations to
many African governments to win it more support. It sounds like a
face-saving measure,” said an analyst who sought anonymity from
PANA.

The meeting comes as Sudan Indigenous NGOs Network (NESI) said
they were aggrieved by what they termed as “the government’s
continued war by proxy” against the civilian population in the
South western parts of the country.