The Trump administration State Department is evidently content to allow recently appointed Charge d’Affaires Steven Koutsis to remain the senior U.S. diplomat in Khartoum, serving as the primary interlocutor on a day-to-day basis with the genocidal National Congress Party regime, which is now celebrating the 28th anniversary of the military coup that brought it to power—as the National Islamic Front, whose ideology the NCP has never abandoned, only trimmed as circumstances warrant.

In his brief tenure (he was appointed only last year) Koutsis has been the spokesman for views that are disingenuously framed, typically misleading, and alarmingly tendentious. Most alarming are his comments of June 24, first reported by Agence France-Presse (El Daien, East Darfur | June 24, 2017), but subsequently by many other news organizations. Referring to those expressing grave concern about Khartoum’s increasing repression and continuing violent suppression of political dissent, religious intolerance, its abysmal human rights record, and its continuing deployment of brutal militia forces in Darfur and elsewhere in Sudan, Koutsis declared:

Here Koutsis is so egregiously in error that we must question his basic diplomatic competence in dealing with the Khartoum regime. U.S. economic sanctions imposed by President Clinton in 1997 are explicit about why they were being imposed; in the Preface of his Executive Order, Clinton declared: 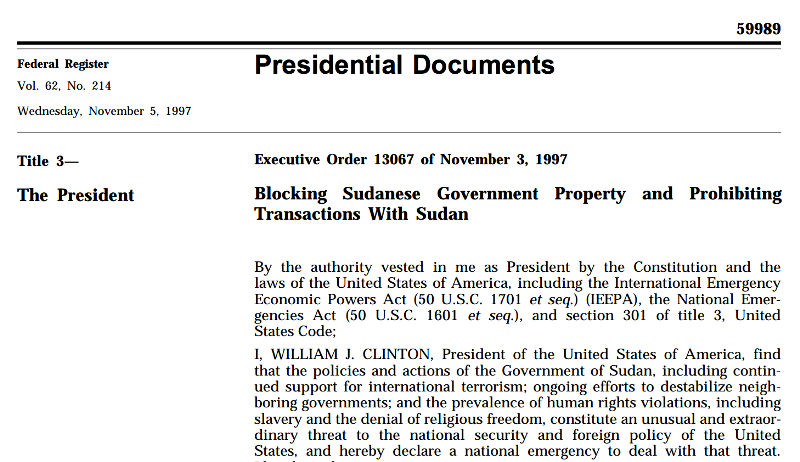 We must wonder what part of “the prevalence of human rights violations, including slavery and the denial of religious freedom” escaped Koutsis’ understanding. Rather more to the point, we must ask whether it was an unforgiveable ignorance of this language in the 1997 Executive Order—or a cynical belief that no one would call him on the outrageous inaccuracy of his statement.

Does Koutsis think that “human rights violations” in Sudan are a minor issue, merely a tag-on to U.S. concerns about Khartoum’s support for international terrorism, support that has kept the NIF/NCP regime on the State Department’s list of “state sponsors of terrorism” for 20 years? Sudan, Syria, and Iran are the only three countries in the world that remain on this list, and for good reason.

But that fact in no way diminishes the appalling nature of human rights abuses by the same regime in its treatment of its own people: torture by the security services is commonplace; the denial of press freedoms only grows more rigorous; suppression of demonstrations has taken the form of regime orders to “shoot to kill” demonstrators (September 2013); political power-sharing and democratization has been relentlessly subverted; bombing of civilian and humanitarian targets by the regime’s military aircraft has been a primary tactic in its wars against marginalize populations living in Sudan’s peripheries (see | http://wp.me/p45rOG-Pv ); chemical weapons were used against civilians in Jebel Marra during the savage military offensive mounted by the regime’s regular and militia forces in 2016 (established conclusively by Amnesty International | September 29, 2016 | https://www.amnesty.org/en/latest/news/2016/09/chemical-weapons-attacks-darfur/ ).

Koutsis would evidently have us believe that none of this matters, or bears on the decision about whether the U.S. should lift sanctions on the regime—sanctions actually strengthened under the Bush administration in 2006 in response to the regime’s continuing genocidal counter-insurgency in Darfur. President (and former self-promoted “Field Marshal”) Omar al-Bashir—installed in office during the 1989 military coup—is the target of an arrest warrant by the International Criminal Court, charging him with multiple counts of genocide and crimes against humanity. The ICC has issued arrest warrant for other members of regime, charging them with crimes against humanity; and many more arrest warrants will be issued when the regime eventually falls.

Again, then, what are we to make of Koutsis’ viciously inaccurate claim that all this is beside the point?

If nothing else, this pernicious falsehood provides context for other of Koutsis’ remarks this year, remarks that create a deeply distorted and highly tendentious picture of present conditions in Sudan—and Darfur in particular.

One of the key “tracks” stipulated in the gravely misguided decision by President Obama to lift sanctions provisionally (January 13, 2017) was an improvement in humanitarian access. The Khartoum regime has for almost three decades used the denial of humanitarian access as a central weapon of war in its counter-insurgency campaigns: in the Nuba Mountains and South Sudan in the 1990s and through the Comprehensive Peace Agreement of 2005; in Darfur from the beginning of major fighting in 2003; and again in the Nuba Mountains of South Kordofan and Blue Nile State beginning in summer 2011.

This has been extraordinarily well documented, by journalists, humanitarian workers, and human rights organizations. So when former Obama administration UN ambassador Samantha Power declared in her last UN press conference (January 13, 2017) that there had been “sea change” of improvement in humanitarian access in Sudan, she was promulgating a deeply destructive falsehood, one admitted to be such by State Department officials. Yet no clarification or correction came—even from Power’s friends in the administration, including National Security Advisor Susan Rice and US Agency for International Development Administrator Gayle Smith, who said nothing—and this perverse characterization stands as the last word prior to Koutsis’ recent remarks on the issue:

“I can say without much hesitation that, with the few exceptions, the advances on the five tracks have been positive,” US charge d’affaires in Khartoum, Steven Koutsis, said. “The few exceptions being… the implementation of humanitarian access is uneven… and that we want to see that the government begins to act more on moving towards a more permanent agreement with the opposition” on ending hostilities.

What a preposterous understatement: rebel-controlled areas of South Kordofan and Blue Nile remain under a humanitarian embargo imposed by the regime, which has resolutely refused to negotiate humanitarian access in good faith. In February 2012 an African Union, UN, and Arab League proposal for such access (known as the “Tripartite Proposal”) was accepted by the Sudan People’s Liberation Movement-North (SPLM-North) in South Kordofan and Blue Nile—but was rejected by Khartoum. Over more than five years, in countless negotiating session, the regime has found ways to accept and then renege, to add condition after condition, to do everything possible to make an agreement on humanitarian access impossible.

Yet when Koutsis weighed in on this issue in a piece written for Sudan Tribune (March 3, 2017), he essentially blamed the SPLM-North leadership, pointing to their reservation about a questionable U.S. proposal made in November 2016—but referring to none of the antecedent history of bad faith by the regime that led to the SPLM-North reservation. This extremely attenuated version of the history of this critical issue is all too typical of what we have seen of Koutsis, who has also not done nearly enough to highlight the overwhelming urgency of the humanitarian situation in Darfur, where access continues to be denied by the regime to many hundreds of thousands of civilians (almost 1 million people according to one highly-informed humanitarian source).

Humanitarian access is “uneven”? This is simply disgraceful dishonesty given the number of people denied any humanitarian relief by the regime Koutsis seems so eager to give a passing grade:

“I can say without much hesitation that, with the few exceptions, the advances on the five tracks have been positive,” US charge d’affaires in Khartoum, Steven Koutsis, said. (AFP, June 24, 2017)

Koutsis simply refuses to acknowledge the extent of desperate humanitarian need in Sudan, and this now includes a raging cholera epidemic, affecting nearly all of Sudan, and that has now reached Darfur just as the rainy season begins in earnest. Humanitarian access could not be more urgently required and the distortions by former UN ambassador Samantha Power and now Steven Koutsis are terrible betrayals of people in critical need.

Koutsis seems already to be looking past the decision on whether to lift U.S. economic sanctions permanently, going so far as to declare last August (2016):

But about the chemical weapons assault by Khartoum against the civilians of Jebel Marra—also in 2016—Koutsis said not a word, a silence in which he was joined by the rest of the world, including those who profess themselves outraged by the use of chemical weapons in Syria. This Obama administration Secretary of State John Kerry, who called chemical weapons use in Syria a “moral obscenity,” but was completely silent about what Amnesty International had conclusively demonstrated about Khartoum’s use of the same sort of weapons in Jebel Marra.

Climate change is a real, present, and massive danger to the world; but chemical weapons use in Darfur is not for that reason less a matter of the gravest concern, a concern that U.S. Charge d’Affaires Steven Koutsis evidently does not share.

Nor does he share the concern articulated so comprehensively in two recent reports on Khartoum’s success in turning Darfur into a “militia state”:

Not to highlight the central role of Khartoum-backed militias in Darfur—to say only that “we want to see that the government begins to act more on moving towards a more permanent agreement with the opposition” on ending hostilities—is to reveal either ignorance or indifference to the most consequential nature of present violence and insecurity in Darfur. Koutsis declares, “Yes, I can say with absolute certainty that Darfur today is more peaceful than it was a year ago.” But his “certainty” is only superficially informed—like his knowledge of the contents of the 1997 Executive Order he wishes to see ended permanently—and ignores countless dispatches from Radio Dabanga and Sudan Tribune that make nonsense of Koutsis’ characterization.

The rape of women and girls is relentless [http://wp.me/p45rOG-1QG/]; the violent expropriation of African farmland by Arab militias and armed groups continues apace [http://wp.me/p45rOG-1P /; camps for the displaced face relentless assaults in one form or another, some by way of arson. Khartoum has made no secret of its wish to dismantle the camps [http://wp.me/p45rOG-1Qo/], a task that will be made easier and less visible with the slashing of UNAMID—44 percent of its present (already reduced) military presence, and over 30 percent of its police forces (also already reduced). If the camps are dismantled and emptied, we may expect a collapse of organized humanitarian relief and an orgy of violence as people lose their only security, tenuous though it is.

In the face of these realities, it would appear that Koutsis is a man equally capable of both the most culpable ignorance and the most cynical indifference to human suffering in the country where he serves as the United States’ senior diplomat. Moreover, as AFP editorializes in its dispatch, Koutsis’ “assessment of Darfur is expected to guide Washington’s decision on sanctions.”

Given Koutsis demonstrated ignorance and cynicism, we must fear a terribly unjust reward awaits Khartoum’s génocidaires.

Sudanese president reiterates that he will not seek re-election