Sudanese protesters take to streets in Omdurman without human casualties 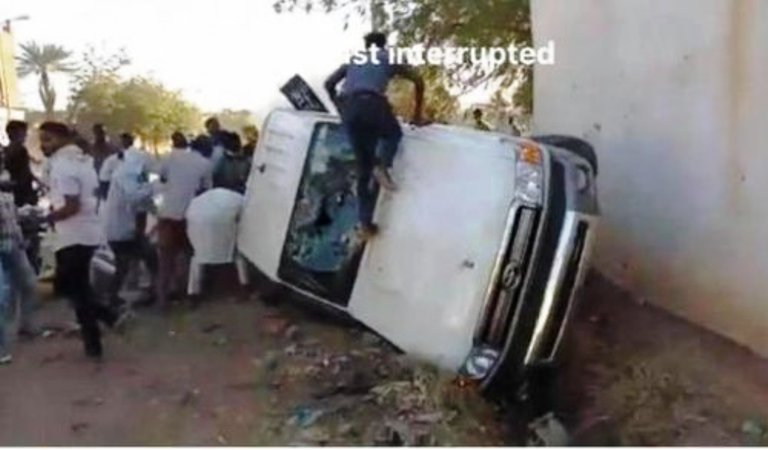 January 20, 2019 (KHARTOUM) – Thousands of Sudanese Sunday took to the street in Khartoum’s twin city of Omdurman as the security forces prevented them from reaching the parliament building and dispersed them without killing one of them.

The demonstrators in Omdurman who chanted slogans against the government of President Omer came out massively from the different neighbourhoods of the town despite the efforts of the security forces to prevent them from marching in the main streets leading to the parliament.

Also, the security forces from their vehicles fired tear gas at the protesters who continued their processions until Al-Abbassiya neighbourhood near the parliament.

One of the vehicles of the security service overturned as they chased the demonstrators at high speed. Some of the security agents fled the crowd as the protesters rescued those who were wounded and prevented the others who tried to beaten them.

Several videos posted by the activists in the social media showed the protesters gathering the grenades of tear gas. Visibly they were not armed.

Salah Gosh, the head of the National Intelligence and Security Services (NISS) said in a briefing to the doctors, members of the ruling National Congress Party (NCP), that the forces deployed in Omdurman were not armed to avoid the killing of protesters.

The protesters helped by one of the wounded security agents before to seize the rear gas grenades amidst the cries of victory of the protesters.

Also, in another street inhabitants of the neighbourhood stopped a police vehicle that has just arrived and overturned it after asking the police officers to evacuate the car.

In a statement released on Sunday night, the Sudanese Professionals Association (SPA) said that the security forces fired live bullets to disperse protesters in Omdurman.

Also, it mentioned reports of wounded demonstrators and cases of suffocation resulting from the heavy use of the tear gas bombs.

The SPA which organizes the protests has called for evening protests in a number of towns on Tuesday and large protests the whole country next Thursday.