September 22, 2019 (NEW YORK) – The Sudanese Prime Minister Abdalla Hamdok is scheduled to meet two senior U.S. officials on the sidelines of his participation in the United Nations General Assembly gathering. 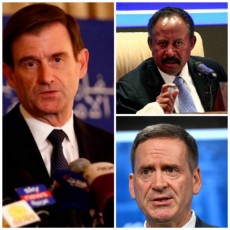 According to a schedule released by the U.S. State Department seen by Sudan Tribune, Hamdok will meet separately with the Undersecretary for Political Affairs at the State department David Hale and USAID administrator Mark Green tomorrow afternoon in New York

Top of the agenda will likely be the status of Sudan on the list of states that sponsor terrorism, debt relief and economic assistance that has long been blocked by U.S. sanctions.

The terrorism designation makes Sudan ineligible for debt relief and financing from lenders like the International Monetary Fund (IMF) and World Bank.

Hale told officials in Khartoum last month that to get off the list, Sudan needs to make headways on issues including human rights, religious freedom and counter-terrorism efforts, as well as promoting internal peace, political stability and economic recovery in Sudan.

Hamdok is the most senior official to lead Sudan’s delegation in the UN annual meetings since 2010 when then-Vice President Ali Osman Taha represented the country.

Thousands of Kenyans flee to Ethiopia after tribal fighting