Sudanese government was not informed about Netanyahu’s meeting 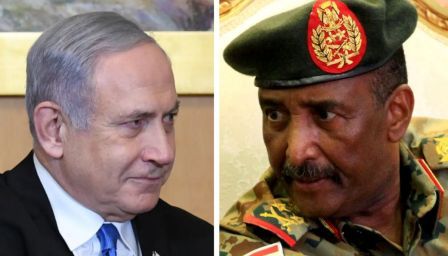 February 3, 2020 (KHARTOUM) – In a short statement issued on Monday evening, the Sudanese government said they were not aware of the meeting between the head of the Sovereign Council and the Israeli prime minister.

Saleh who issued the statement very late during the night further said that the Council of Ministers had not been informed or consulted about this meeting.

“We will wait for clarifications after the return of the President of the Sovereign Council,” he concluded.

The Prime Minister Abdallah Hamdok who was in a two-day visit to Djibouti returned on Monday evening but he did not hold a press conference or make any statement as he used to do.

Many people reacted to al-Burhan-Netanyahu meeting in the social media according to their support to the civilian or the military components of the transitional authority.

Those are against the military denounced the meeting saying it was a coup from al-Burhan to improve his image and to establish good relations with Washington.

Others also criticized Hamdok saying he used to speak about coordination and harmony between the two components “where is the coordination?” many wrote.

Those who support al-Burhan applauded the visit saying it would help to end Sudan’s isolation. They also said it was normal that he meets with Netanyahu without informing the government.

Sudan to hold talks with eastern group in Eritrea