KIGALI, Oct 17 (Reuters) – A battalion of Rwandan peacekeeping troops scheduled to arrive in Sudan’s Darfur region this weekend will be delayed by a week because of logistical problems, Rwanda said on Sunday. 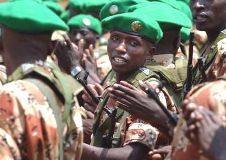 The Rwandan troops are part of an African Union force of 4,500 being deployed to monitor a shaky ceasefire in Darfur, where fighting has forced more than 1.5 million people from their homes since February 2003.

An estimated 70,000 people have died during the conflict, according to the U.N. World Health Organisation.

“There are some outstanding issues related to logistics that they need to finalise. Our forces are ready to go anytime,” he told Reuters. Mitali did not specify the number of troops in the battalion, which usually has between 500 and 1,000 soldiers.

The Sudanese government two weeks ago agreed to allow and additional 4,000 AU peacekeepers into the country, who will join 150 ceasefire monitors and 300 AU troops already there.

Khartoum has said it is waiting for the AU’s Peace and Security Council to meet on Oct. 20 and decide on the expanded duties and numbers of the force.

AU Chairman Olusegun Obasanjo on Friday said the expanded force should be in place by the end of November. The Rwandan battalion was to have been the first of the new group to arrive, followed by a Nigerian battalion, he said.

Obasanjo, the Nigerian president, said he expected three other countries to supply a battalion each.

Rwandan soldiers were the first foreign force to go to Darfur, arriving on Aug. 16 to guard observers monitoring the ceasefire.

Peace talks between Sudan and rebels from the Darfur region are expected to resume in Abuja, Nigeria, on Oct. 21.