ADDIS ABABA, Oct 22 (Reuters) – The European Union is likely to announce a contribution of more than 100 million euros to an African Union force in Darfur, amid calls for extra AU soldiers to be deployed in Sudan’s troubled region. 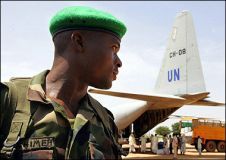 “The EU is ready to help finance this operation. It could finance more than half the cost of the operation. Over 100 million euros ($126 million) could be given together with technical support, expertise and planning,” an EU diplomat said on Friday.

EU foreign policy chief Javier Solana is expected to land in Ethiopia, headquarters of the AU, on Friday, where he will hold talks with AU Commission chairman Alpha Oumar Konare and other top officials on Saturday.

The AU’s Peace and Security Council agreed on Wednesday to send more than 3,000 additional troops to Darfur, an area the size of France, to restore security and monitor violations of a shaky ceasefire between rebels and government forces.

Deployment could begin next week, the EU diplomat, speaking in Brussels, said.

There are currently only 300 AU soldiers in Darfur tasked with protecting 150 AU ceasefire monitors.

“We are alone. We have 780 international and 5,500 local aid workers, and we feel very alone in Darfur at the moment,” Egeland said after briefing the U.N. Security Council.

“We need to have the African Union presence and they need to be funded by the donors to be able to deploy. We are waiting endlessly to get the people on the ground.”

Insecurity poses the biggest threat to humanitarian aid in Darfur. The World Food Programme (WFP) said on Friday that unidentified men, some in civilian clothing and others in uniform, had attacked dozens of WFP-contracted trucks in South Darfur in the past week.

In one case, 36 trucks were attacked on Oct. 15. Although no food was looted, the attackers beat some drivers and took their personal belongings.

The WFP said it had successfully delivered enough food to feed 632,000 people between Oct 1. and Oct.18, but said if the insecurity worsened, further deliveries might become difficult.

More than 1.5 million people have been made homeless since two rebel groups, accusing the government of neglect, launched a revolt in early 2003 following years of skirmishes between African farmers and Arab nomads over land.

Rebels say the government has used Arab militias known as Janjaweed to put down their rebellion and to loot and burn villages. The Sudanese government admits arming some militias but denies links to the Janjaweed, calling them outlaws.

The United Nations estimates 70,000 people have died from malnutrition and disease in the last seven months alone, although the Sudanese government disputes this.

A fresh round of peace talks between Darfur rebels and the government had been due to begin in Abuja, Nigeria this week but a transport mix-up left delegates stranded across the continent.

Preliminary consultations on the timetable and agenda of the Abuja talks between the AU and delegations were due to start on Friday afternoon, but rebels said they wanted to make changes to a proposed AU agenda.

AU officials hope the talks will begin on Monday.

(Additional reporting by Sebastian Alison in Brussels, Ross Colvin in Nairobi and Silvia Aloisi in Abuja)