TOKYO, Nov 12, 2004 — Japanese government decided to provide Food aid for conflict-afflicted people in the Sudan’s Darfur region to be implemented through the World Food Programme (WFP), said a press statement issued by the Ministry of Foreign Affairs of Japon. 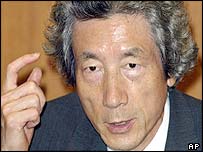 The amount of the aid (330m yen; approximately 3m dollars) will be dedicated to procure sorghum, which is the staple food for the people in the region, from other parts of the Sudan and distribute it through the WFP to suffering people in the Darfur region.

Notes to this effect were exchanged on November 12 (Friday) in Rome between Ms Nobuko Matsubara, Japanese Ambassador to Italy, and Mr James T. Morris, Executive Director of the WFP.

The communiqué said this aid will be implemented as a part of the announcement made by Prime Minister Junichiro Koizumi in his address at the UN General Assembly that the Government of Japan would provide additional assistance in the amount of 15m dollars towards the humanitarian crisis in the Darfur region (total assistance amounting to 21m dollars including Japan so far provided).

Japan’s foreign minister Yoriko Kawaguchi informed the Sudanese official that Tokyo would consider extending aid to Sudan, but only if fighting in the Darfur region dies down.

Japan sent Sudan US$1.17 million (euro 97,023) in grants and funding for technology-related projects in 2002, the most recent year for which Japanese government statistics are available.

Ethiopia on track for WTO membership

US Bush discusses Darfur & CPA with special envoy to Sudan