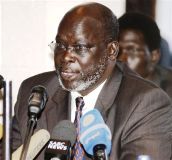 Among the topics to be discussed are ways in which South Africa can help consolidate peace and support democracy in Sudan , the statement said.

Last month, the Sudanese government and rebels pledged to meet a Dec. 31 deadline to end their conflict at a special meeting of the U.N. Security Council in Kenya.

More than 2 million people have died – mostly from war-induced famine and disease – during the conflict, which is Africa’s longest-running civil war.

The conflict pits Sudan ‘s Islamic government against rebels seeking greater autonomy and a greater share of the country’s wealth for the largely Christian and animist south.

Peace talks on southern Sudan are separate from others focusing on the conflict in Sudan ‘s western region of Darfur, where the government has tried to crush two non-Arab African rebel groups by backing Arab militias who are accused of targeting civilians in a campaign of murder, rape and arson.

U.N. officials have said a successful peace settlement in southern Sudan could provide much-needed impetus for peace in Darfur, which will also be under discussion here Friday.

The South African government is encouraged by the “solid progress” made so far and believes the southern peace process is at its final stage, the statement said.

South Africa pledges to support efforts for peace in Sudan

New round of talks to end Darfur conflict planned for August