ADDIS ABABA, Ethiopia, Dec 3, 2004 (AP) — African Union peacekeepers in Sudan’s troubled Darfur region went on high alert after a cease-fire observer was wounded by an unidentified gunman in the first reported attack on the force, a spokesman said Friday. 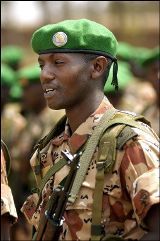 AU spokesman Assane Ba said the 830-man peacekeeping force would not be intimidated and would not hesitate to use force in self-defense.

“This is the first time we have come under attack since we arrived in Darfur,” Ba said. “This is unacceptable.”

A Chadian officer was shot in the shoulder Wednesday when an AU convoy came under attack while traveling to the village of Adwah, in southern Darfur, to investigate an alleged bombing by government forces in breach of a cease-fire agreement with rebels. The officer’s wounds were not life-threatening.

“Our forces are not just going to sit there and be shot at. If they come under fire then they will shoot back,” Ba said. “Under their rules of engagement they can open fire to protect themselves, but they didn’t in this instance because they did not see who fired the shots.”

The AU protection force has now been placed on high alert.

“We will not give in to intimidation,” Ba said.

The AU brokered a peace deal agreement between rebels and the government to end the conflict in Darfur, but there have been constant breaches of the cease-fire.

The incident comes as the force is being increased to 3,320 troops. Ba said they would be in place by early January 2005. A Senegalese and Nigerian contingent is due to fly into the region, which is the size of France, in the next two weeks.

The Darfur conflict started in February 2003 when two African rebel groups took up arms to fight for more power and resources. The Sudanese government responded by backing an Arab militia, the Janjaweed, who are accused of targeting civilians in a campaign of murder, rape and arson.

International agencies estimate that disease, malnutrition and clashes among the displaced have killed more than 70,000 people since March.

Khartoum says rebels use Darfur as tool for ‘New Sudan’