NEW YORK, Dec 7, 2004 (PANA) — With increased clashes threatening to plunge Sudan’s western Darfur region into further chaos, a top UN official Tuesday called on the international community to exert pressure on the Khartoum government and rebels to abide by their pledges to end what the UN has called the world’s worst humanitarian crisis. 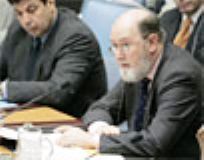 “Despite some earlier gains, November was characterised by
violence and a marked deterioration in the security situation,”
UN Under-Secretary General for Political Affairs Kieran
Prendergast told the Security Council in a report circulated
Monday.

He cited ceasefire violations by both sides, as well as
banditry, looting, increased activity by the Janjaweed and
other pro-government militia, and the government’s failure
to disarm them.

Some 1.7 million people have been displaced since rebels
took up arms last year to demand a greater share of the
region’s economic resources, with the Arab Janjaweed militia
accused of killing and raping thousands of villagers.

Prendergast said the rebel Sudan Liberation Army (SLA) was
thought to be responsible for much of the violence in violation
of security and humanitarian accords, which the rebels the
Khartoum government signed in early November in Abuja,
Nigeria.

The rebel movement denies the charge, but the UN official said:
“a clear message needs to be sent to the SLA to stop military
action, at least some of which appears deliberately intended
to provoke the government into retaliation.”

He said government air raids in retaliation, which Khartoum
has also denied, would – if confirmed – also violate the Abuja
accords, and warned that the armed militias should not be
allowed to take the law into their own hands by responding
in kind to violence instigated by the SLA.

“Regrettably, the government has made no progress in disarming
the Janjaweed,” Prendergast said, adding that the African Union
(AU) Ceasefire Commission had confirmed that it had not been
invited to verify any disarmament activities by the government.

According to him, there is no evidence of the government bringing
to justice Janjaweed leaders for their past crimes as demanded
by the Security Council resolution 1556 in July.

“Indeed, unconfirmed reports continue to circulate that the
armed militias continue to receive arms from some quarters in
Khartoum,” the UN official charged.

Prendergast praised AU efforts to get the parties to comply
with their commitments, as well as the role of the African
Mission in Sudan (AMIS).

But he noted that the AMIS only had 800 troops and just over
100 military observers in Darfur for its monitoring and
mediating tasks.

“The government’s inaction regarding the disarmament of the
militia underscores the need to strengthen AMIS’ capacity even
further,” Prendergast said, noting that the increased insecurity
and the rainy season had cut off relief operations from tens of
thousands of vulnerable civilians.

Thousands will die in Darfur without military-backed relief effort : WHO

Darfur: A chance for us to act