KHARTOUM, Dec 21, 2004 (Xinhua) — A new group of 99 Gambian troops arrived Tuesday in el-Fasher, the capital of northern Darfur in the western region of Sudan. 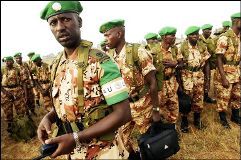 The 99 Gambian troops will join 97 others who have been deployed in Darfur among the 550-strong African Union (AU) peacekeeping forces, reported the Sudan News Agency.

The Gambian troops reached the war-affected Darfur region within the framework of the expanded AU mission to observe the Sudanese government and the rebels’ commitment to a ceasefire agreement signed in April.

Chief of AU observers to Darfur, Antono Amido, met the Gambian troops in el-Fasher and called on the AU troops to work honestly in Darfur and shoulder responsibility so as to reassure that Africa ” is capable of solving its own problems.”