BAHRAIN, Feb 10, 2005 (Bahrain Tribune) — “The Darfour crisis has been created, and worsened, by the biased handling of the United Nations and the government of Sudan will initiate dialogues with rebels next week,” Abdal Hamid Musa Kasha, Sudan’s Minister of Foreign Trade, said in Bahrain yesterday. 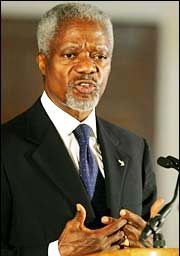 Kasha, who was in Bahrain to take part in the 10th Islamic Trade Fair, said at a Press conference: “Some forces want change in Sudan’s government but they shouldn’t forget that the political seat of Sudan is not Darfour but Khartoum. They have to come to Khartoum if they want to change the regime.”

Referring to the UN’s observation that the Sudanese government was not doing enough, the minister said that the UN secretary-general had a biased opinion over this issue. “Kofi Annan can’t see the Abu Ghraib prison scandal. He can’t see the Palestinian issue, Afghanistan and so many other issues. Why only Darfour?”

Kasha said: “We have a 100 per cent Muslim population in Darfour, and this region consists of three states out of a total of 26 in the country. The government has been providing all possible assistance in disarming the rebels and bringing them under one umbrella to reach a long-lasting peace.

“It is Western propaganda which encourages the rebels not to come to the negotiating table,” the minister said. “We’ve been working sincerely to end this crisis but other factors, including the UN’s dubious role, are complicating the situation. We have a proper representation from the Darfour region in legislative bodies, administration and even in the army. How can a government tolerate a situation like that of Darfour?”

Talking about the possible time frame to reach an agreement with rebels, the minister said the government would initiate a fresh round of talks by the middle of this month.

“The peace agreement can be signed within six hours but again it is subject to the successful negotiations. We are sincere and committed to peace agreement and the government will spare no effort to sort out these differences with the rebel groups,” the minister said.

The minister said that the government of Sudan would bring to justice all those found guilty of committing crimes during this crisis. “We are ready to initiate legal trials against criminals and the Sudanese court and tribal systems are capable for ensuring all possible justice,” the minister said.

“We are afraid that the suggestions to send the cases to the International Court of Justice will create a real social problem within the Sudanese society. Our society is based on tribal system and it is not possible to send people outside Sudan to face justice,” the minister said.