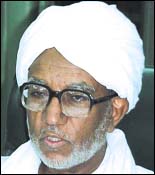 KHARTOUM, Feb 13, 2005 (Al-Khartoum) — Secretary-General of the ruling National Congress Ibrahim Ahmad Omar, has welcomed the results of the meeting of the opposition National Democratic Alliance (NDA) held in the Eritrean capital, Asmara, particularly relating to its concurrence with the southern Sudan peace agreement and the agreement arrived at in Cairo between the government and the NDA.

At a news conference he held yesterday at the party’s HQ, the secretary-general refused to link participation of the NDA in the general national committee for drafting the transitional constitution to adjustment of the percentages of participation stipulated in the agreement, saying the percentages would remain the same.

Concerning the final round of negotiations between the government and the NDA in Cairo and which were due to begin today for the signing of the final agreement, Prof Umar said that they have unofficially learnt the NDA has requested for the postponement of this meeting for a week.

Commenting on the negotiations between the government and both the Beja Congress and Free Lions [eastern Sudan], he said a special committee was currently studying the situation.

He further announced 10 March as the date for the party’s Shura (Consultative) Council’s on the party’s reforms, adding that the delay in the holding this meeting was to meant to grant the leadership body more time to discuss proposed reforms proposals which would enable it to meet the requirements of the coming period.

Sudan releases man who organized escape of US diplomat killers

Vision 2040: South Sudan builds on good governance as it pursues vision for future

Talks on cessation of hostilities in Sudan are delayed for mid-November : UN