KHARTOUM, Feb 22, 2005 (SUNA) — Sudanese president Omer Al-Bashir affirmed that commitment to implementation of the peace agreement between the government and Sudan People’s Liberation Movement (SPLM) constitutes the first step towards unity and stability in the country. 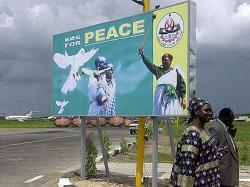 Addressing the political forces of the southern states here Monday, Al-Bashir said the National Dialogue Conference on Peace Issues, which was held in the early years of the “Salvation Revolution” was the foundation of the peace and rehabilitation process in the country.

He pointed out that peace has remained as the strategic goal of the “Salvation” regime.

Al-Bashir commended the role of the southern political leaderships in boosting the political and mobilization work in the south.

He called on the international donors conference to be convened in Oslo next April to live up to its commitments towards the peace agreement and to finance the development and rehabilitation projects at the war-affected areas.

The President pointed out that the visit he paid recently to Unity State showed him the extent of the rehabilitation and development effected in the state after realization of stability.

He affirmed the readiness of the ruling National Congress to cooperate with SPLM in the framework of the political partnership between the two parties, calling on all southern political forces to support the comprehensive peace agreement for realizing stability and development.

Sudanese delegation to Chad soon for talks on normalizations