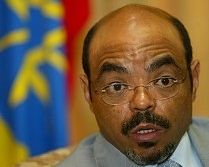 Some 61 Somali lawmakers, including warlords-turned-Cabinet ministers, said Sunday that including troops from neighboring Ethiopia, Djibouti and Kenya in a regional force to secure Somalia would undermine fragile efforts to end a 14-year civil war in the Horn of Africa nation.

“The bottom line is our offer is still on the table but we are not going to impose ourselves on Somalia,” Prime Minister Meles Zenawi told reporters. “It is up to the Somali government and the Somali people.”

Ethiopia supported Somali factions with money and weapons in the war, and its troops could seek to advance Ethiopian interests if deployed in the country, some Somali lawmakers said.

Somalis also remember the war they lost in 1977 over control of Ethiopia’s southeastern Ogaden region, largely inhabited by ethnic Somalis. The Somali army never recovered from the defeat, a fact that eventually helped warlords to overthrow dictator Mohamed Siad Barre in 1991.

The warlords then turned on each other, reducing the nation of 7 million to patchwork of clan-based fiefdoms.

Speaking at a joint press conference with the visiting Turkish Prime Minister Recep Tayyip Erdogan, Meles said opposition to Ethiopian peacekeepers is a product of internal politics in Somalia.

“Some groups may not wish to have peacekeeping troops that they suspect will be effective in enforcing the (peace) agreement,” Meles said.

Somalia’s transitional Cabinet asked the African Union and Arab League last month to send between 5,000 and 7,500 troops with a one-year mandate to protect the government as it organizes a police force and army.

The AU Peace and Security Council authorized deployment of an interim force ahead of a fuller AU mission.

Residents of Mogadishu and other southern towns have held several demonstrations against having troops from Ethiopia, Djibouti and Kenya included in a force. Some rejected troops from any foreign country.

Kenya and Djibouti later said they would not send troops

Uganda protests to Sudan over rebel base near Sudanese army