CAIRO, March 6 (AFP) — The humanitarian crisis in the Darfur region of west Sudan is being contained but the international community has failed to take action on the political front to end the violence, the UN’s relief coordinator said. 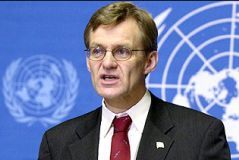 “I now have a very strong sense that the international community has succeeded on some fronts and is failing on others,” the UN undersecretary general for humanitarian affairs, Jan Egeland, told AFP from Darfur.

On the penultimate day of a five-day tour of Sudan, he praised the estimated 9,000 aid workers operating in strife-torn Darfur in countering what the United Nations described last year as the world’s worst ongoing humanitarian crisis.

“In the Kalma camp, which was once a symbol of the suffering, starvation and death in Darfur, there are now lower levels of malnutrition and higher levels of education than in the general population before the war,” Egeland said.

Tens of thousands of people have died from two years of fighting and dire humanitarian conditions in the western region, where the government and its proxy militias have brutally put down a rebellion launched in February 2003.

Egeland admitted that the humanitarian infrastructure was drawing more civilians to the camps and risked perpetuating the displacement of an estimated 1.6 million people who fled their homes in Darfur.

“We are increasingly facing this problem. There are push and pull factors displacing people,” he said, adding that security conditions were still too poor however to allow humanitarian assistance to penetrate the countryside.

Egeland said the main concern was the lack of international mobilisation to push for a political solution and support the efforts of the African Union (AU), which has deployed a monitoring force in Darfur.

“The world has failed utterly in the most important aspect, which is to heal the wounds of the warring parties by political efforts,” he said in the telephone interview.

“The AU force is much better than people say … but it is unbelievable that the world has not been able to help more,” Egeland said.

“The international community is now set up to send massive humanitarian assistance anywhere in the world and very quickly,” he said. Yet “it cannot deploy a proper observer force in half a year”.

Since last fall, around 1,900 AU troops have been slowly deployed in the strife-torn region but have failed to enforce a ceasefire agreement between government forces and Darfur rebels.

“For a territory the size of France, we need at least five times that number,” said the UN envoy.

Egeland said he met with the political and military leaders of the two main Darfur rebel groups and “warned them they were losing international sympathy” by balking at ceasefire talks and impeding humanitarian work.

The UN relief envoy said he would tell Sudanese Vice President Ali Osman Taha in talks Monday that the “government is also failing to rein in its militias and allowing indiscriminate attacks”.

The United Nations has threatened sanctions on Khartoum for its role in what the US Congress describes as a genocide.

But the Sudanese government on Sunday warned the United Nations that slapping sanctions over Darfur could endanger a January peace agreement which put an end to 22 years of civil war in southern Sudan.

“We appeal to the Security Council not to take any action that could jeopardise the peace agreement and its possible positive impact on resolution of conflicts in other parts of the Sudan,” State Foreign Minister Naguib al-Khair Abdel Wahab told AFP.

Egeland praised the efforts of all sides involved in drafting the landmark north-south peace deal, but also warned that humanitarian considerations had been neglected.

“It’s the reverse situation of Darfur. We are failing on the humanitarian front, there are no resources for southern Sudan,” he warned.

He said only 10 percent of the 500 million dollars needed for the relief effort there had been paid by donors.

“At the moment, the international community is not doing its bit in south Sudan, and this will make it more difficult for the Sudanese to cement peace,” he warned.