UN’s Annan to give ICC names of Darfur suspects 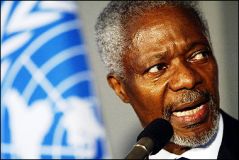 Under the terms of a UN Security Council resolution passed Thursday, warcrimes suspects must appear before the ICC. Annan will deliver the names on Tuesday, Fred Eckhard said.

“The secretary general is expected to transmit to the prosecutor the sealed list of names that was given to him by the international commission of inquiry that reported to him earlier this year,” Eckhard said.

The commission established that warcrimes and human rights violations had been committed in Darfur, while falling short of the definition of genocide.

The commission handed the list of suspects to Annan under seal.

Branding Thursday’s resolution demanding prosecution in the Hague of 51 named suspects, including senior officials, a violation of its sovereignty, the Khartoum regime insisted its own courts were competent to try them.

President Omar al-Beshir solemnly swore “thrice in the name of Almighty Allah that I shall never hand any Sudanese national to a foreign court.”

Resolution 1593, passed by the UN Security Council by a 11-0 majority, overrode strong opposition from Sudan to impose international trials for the 51 suspects identified by the UN commission.

A scorched earth campaign waged by the government against rebels has left more than 300,000 dead and 2.4 million people displaced, according to a report by a British parliamentary committee.

A ceasefire signed by both sides a year ago has been widely violated despite the deployment of an African Union monitoring force, prompting ever louder demands from the rebels for the intervention of Western armies with more sophisticated logistics capabilities.

Darfur’s ragtag rebels vow to fight for all ‘marginalised’ Sudanese