CAIRO, April 10 (AFP) — A summit on the war-torn Sudanese region of Darfur planned for April 20 has been postponed for logistical reasons, the Egyptian government said Sunday. 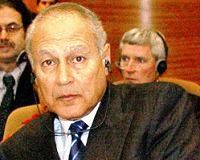 “The Darfur summit has been postponed because some of the participants were not available,” Egyptian Foreign Minister Ahmed Abul Gheit told reporters.

Egypt was to host a mini-summit in the Red Sea resort of Sharm el-Sheikh on April 20 with other leaders from Chad, Libya, Nigeria and Sudan to try to find a solution to the Darfur crisis.

Darfur rebel groups had already rejected the idea of the summit, charging that its only purpose was to offer support to the Sudanese government.

A similar five-way meeting over Darfur — also without the presence of the rebel movements — was held in Libya in October last year but failed to yield any significant results.

According to a British parliamentary report, some 300,000 people have died in Darfur from the combined effect of war and famine since a rebellion broke out more than two years ago and was brutally repressed by Khartoum.

On April 1, the UN Security Council passed a resolution referring Darfur war criminals to the International Criminal Court in The Hague, in a bid to pressure Khartoum into reaching a political solution to the conflict.

Death and deception in Darfur