April 13, 2006 (CAIRO) — Egyptian Foreign Minister Ahmad Abul-Gheit said on Thursday Egypt was deeply worried over the recent tensions between Sudan and Chad, noting that Cairo was involved in efforts aiming at calming down the situation. 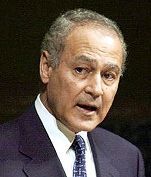 These remarks were made by the Egyptian top diplomat in response to reporters’ questions following his meeting with Chadian Foreign Minister Ahmat Allami.

Abul-Gheit urged both countries to wisely deal with the current situation to maintain good neighbourliness and preserve the historical ties binding the two peoples. The minister also underlined the importance of resuming security cooperation with Sudan to halt cross-border violations which could drag the region into a wave of instability.

A press statement by the Foreign Ministry said the meeting took up bilateral and African issues of common interest, the Egyptian MENA reported.

Asked whether the Chadian part had requested something specific from Egypt in light of the current developments, he said the Chadian minister asked for Egypt’s help in calming down the Chadian-Sudanese tensions.

South Sudan elders in talks with Malong over guards’ disarmament

British minister in Ethiopia to discuss border dispute with Eritrea